Verana would most easily be described as a relatively aloof, cool, eccentric, and somewhat enigmatic figure. Shaped by her Deltan upbringing, Verana carries a natural sensuality to her though she is not as overt nor as naturally and constantly seductive or enticing as other Deltans and is rather reserved in her sexuality (For a Deltan). Since her six month leave from Starfleet, Verana has changed into a more confident and overall happier person. She attributes the change to 'Sun and Caffeine', but there may be more to it.

Jieral is a philosophy professor and anti-Federation political activist who is ardent in his belief that the Federation is little more than a human hegemony designed to weed out other cultures and non-human ideas. Jieral’s relationship with his daughter is strained but still quite close since she went to live on Earth. He is content to simply let Verana learn about the humans and their plot the same way he did, through contact and immersion.

A former travel writer by profession, Qhillian wasn’t born on his father’s homeworld of Delta IV and had never visited it till he decided to travel there after some thirty plus years of travel writing. Qhillian nearly instantly went native after he met graduate student Jieral and has stayed on Delta IV ever since and has turned to being a holonovel writer. Since Verana left and found most of his time that was formerly spent raising his daughter unoccupied, Qhillian has been dragging his husband across the galaxy. Jieral found these first experiences off Delta IV and into the larger Federation unnerving but has sense come to embrace the constant travel and adventure. A few years ago when Qhillian literally knocked Jieral over the head and dragged him to Earth, they decided to have another child, this time a boy named Zale. Qhillian, Jieral and Zale now live on Earth in Paris, where Jieral is now in the employ of the Deltan consulate and Qhillian writes his popular weekly column on marriage, raising a child, and the life of aliens on Earth. 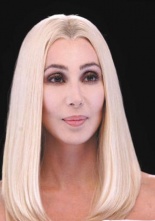 Another philosophy teacher and old professor and mentor of Jieral’s, Ziarre is an (Apparently) human woman from Earth specializing in ethics. Ziarre is eccentric and bright, and when Verana first came to live on Earth with Ziarre and her roommate Melisende Clarke, Ziarre found herself a kindred spirit with Verana. Ziarre’s other mannerisms rubbed off on Verana, like constantly dying her hair and changing its style, and living life to the fullest. Ziarre formerly taught at La Sorbonne but has since started teaching at Starfleet Academy as a guest lecturer and currently resides in San Francisco. 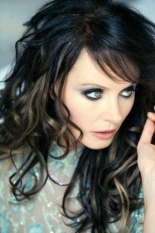 Calm, cool and cerebral, Melisende isn’t as vibrant as her roommate and long term friend Ziarre but is just as fun and interesting, when she wants to be anyway. Melisende served in Starfleet for over 40 years before retiring a few years ago after stepping down from her post as Director of Starfleet Science. Melisende and Ziarre met 35 years ago when Ziarre was part of a team of lawyers hammering out a treaty with the Klingon Empire aboard the USS T’Pau and Melisende was the fresh and ambitious new Chief Science Officer. While the two haven’t always been in transporter distance of each other since then, they are remarkably close and for the past 11 years have resided on Earth together, raising and housing Verana on Earth in the absence of her parents.

Alabaster pale, computer geek, without romantic companionship… yes Verana Efeildi Tridalii is the epitome of a lonely nerd, though she carries the title with dignity and a bit of pride. Born to monogamous men on Delta IV, Verana’s conception and upbringing where somewhat unconventional and that strain of being outside the norm has continued into her adult life.

A mixture of Deltan and unknown genes, Verana exhibits largely Deltan traits, though unlike other members of the species, Verana displays a long, flowing head of hair that has been constantly changing color for so long that she can (Allegedly) not remember it’s natural color. These genes might have given her an extended lifespan as the father that supplied these genes to Verana is well over 90 years old and looks a youthful thirty or so. Verana has also inherited the incredibly acute and heightened Deltan senses that make her extremely sensitive to her environment. The past is not the point of constant contention it once was for Verana and for now she is content to sometimes wonder just who and what her grandmother was, not letting a mystery from the past consume her.

Brilliant and eccentric, Verana is a gifted mathematician and computer science theorist who has given herself to the service of the Federation though she did not start out as such. Verana was originally a Computer Systems Theory student at the University of Paris' University of Pierre and Marier Currie and after her undergraduate graduation and dealing with her first true grapple with her depression, transfered her graduate studies to Starfleet Academy where she completed core officer training and gained her Doctorate in High Technology. She is currently an Ensign serving on the USS Excalibur-A. 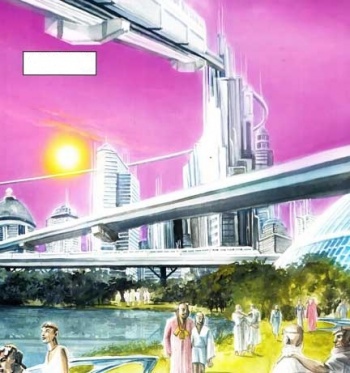 The City of Nammu on Delta IV at the time of the Fall Equinox.

Born on the planet Delta IV, Verana Efeildi Tridalii was born to two Deltan men Qhillian and Jieral, though she was surrogated by Izillia, Jieral’s first cousin. Born and raised in the Jewel of the North, the city of Nammu, where the sky turns a bright violet once every year at the Fall Equinox, Verana’s childhood was beautiful, even serene. Delta IV was a primordial paradise of azure oceans and islands that had no rival in splendor.

Raised by her fathers to be intelligent and independent, Verana developed an interest in the sciences and academia from a young age, both from her philosophy professor father and her writer… other father. Jieral and Qhillian were also unique among Deltans in that they were completely monogamous and never indulged in the company of other Deltans outside the marriage. This unconventional upbringing (At least among Deltans anyway) also pushed Verana into an unintended isolation from her peers and made her not an outcast, just… different. While some could push past her hybrid status, most could not get over the fact that her parents were raising her to be rather… reserved in her sexuality compared to other Deltan children.

Eventually Qhillian saw how unhappy his daughter was around her own people and over the next few months arranged for Verana to go live on Earth with Dr. Ziarre Lera. Jieral would normally have protested this action, his humanphobia even more pronounced since Admiral Leyton’s failed coup of 2372 and the Breen’s attack on Earth just over four years earlier in 2375. But Jieral acquiesced to Qhillian’s plan with little protest, recognizing that it was for the good of his child.

So at the age of 14 Verana was sent to Earth to live in San Francisco with Doctor Lera and her longtime friend and roommate Melisende Clarke. This change was a bit of a culture shock to Verana, the smells, tastes and sensations to which her heightened Deltan senses were so in tuned to were radically different on Earth. The change in climate also hit Verana hard, and over the next few months she would develop a form of clinical depression not unlike the one Qhillian had developed when he moved to Delta IV. Verana still grapples with her depression but controls it through meditation; the effects are also somewhat muted in space where the environment is more controlled.

Upon reaching her 16th year Verana graduated early from her secondary school education to pursue early enrollment in university level courses. Initially wanting to pursue a career as a civilian computer researcher, Verana attended the University of Paris (Reformed) at the University of Pierre and Marie-Currie.

But upon completing her degree three years later Verana, for the lack of a better word, found her life empty and disillusioned by career options and further graduate study. Melisende and Ziarre quickly became very worried about Verana and feared a downward spiral into deep depression. Verana first took anti-depressants during this time, which she had formerly avoided due to a risk of dependency. Abandoning her graduate plans Verana found herself wandering the streets of Paris at night, experiencing the atmospheres of different clubs and lounges throughout the summer of 2385. It was there Verana met a fellow Deltan hybrid, Ensign Alexandre Xavier, the man that provided Verana so many unique and first experiences. But besides an eventual romantic entanglement Alexandre also influenced Verana’s decision to join Starfleet, with a little help and support from Melisende of course.

This choice was not without its points of contention between Verana and her father Jieral and while he never threatened to do anything drastic like cut off contact with her, Jieral was very vocal in his opinion against Verana joining the ‘Human Armada’.

Verana had passed the Academy entrance exams months before but did not enroll till October of 2385 as a member of the class of 2389. Verana entered Starfleet Academy after already completing her undergraduate education, and as such, pursued primarily advanced courses in various topics required by Starfleet Academy as she had already completed most of the core courses at the University of Paris.

Verana’s time at the Academy was primarily uneventful, she was an excellent student but never recommended for an elite cadet squad or other Academy program for the best and the brightest. Verana was known to be eccentric and vibrant, if quiet, and while many saw that she could achieve great things academically, it was a consensus among her instructors that Verana would never amount to much because of her lack of external charisma.

But Verana’s time at the Academy did something to change her and she allowed herself to meet new people she wouldn’t have otherwise known. Most prevalent among those is Ensign Desqabara ch’Thel, Verana’s lab partner, confidante, roommate, and ‘Best Friend Who Enjoys the Company of other Men…”.

Verana graduated with honors but with no special recommendations from her instructors, to Verana their lack of faith is somewhat disappointing and hurtful but she knows that she is exceptional and she will rise to the occasion when it is called for... she simply needs the right assignment…

Verana joined the crew of the USS Tiger-A in early June of 2390 as a Computer Specialist assigned to computer control. When the ship crashed on the gateway planet, she was caught in computer control but was later able to lead several officers to safety.

While not technically assigned to computer control, Verana spent much of her time there trying to bring the Constitution's outdated computer up to current standards. When the ship docked at Deep Space 285 after the mission to Sotra, she was tasked with upgrading the computer's subroutines. Unbeknownst to her, she actually uploaded the command protocols of Maquis terrorist and ex-Starfleet computer scientist, Avine de Massard. She was subsequently knocked out when Avine stormed computer control under the blinding cover of strobe lights and blaring klaxons.