The Tribble Fanciers Association (TFA) is a group of Tribble enthusiasts from all over the Federation and serves as the governing body of competitive Tribble showing in the Alpha and Beta Quadrants. They control the issue and regulation of:

They are also advocates for responsible Tribble keeping in general. 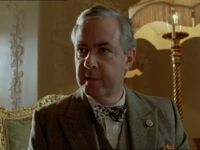 President of the TFA, Duncan Lovejoy.

The groups objectives and rules are as such:

The TFA appoints its own President, Vice President and Committee. The President of the Association shall serve for a period of two years and will thereafter be ineligible for election to that capacity or that of Vice President.

Fanciers from all over the galaxy are invited to attend annual conventions where members can meet in person, show off their Tribbles and discuss the benefits of Tribble ownership. The conventions usually last a few days and are accompanied by guest speakers, events and a special banquet.

In 2393, the inauguration banquet hosted on Starbase 118 was was abandoned due to weaponised tribbles genetically modified to administer poison, causing comas. The 118 Starfleet contingent synthesize a Klingon pheromone that effectively repels and contains the tribbles, and Boris Malinov is discovered to be responsible. Regardless, the convention overall was largely successful and drew 26,000 visitors to the starbase.[1] The association chooses to hold the 2394 convention on Penthara IV.[2]

'Furs' is an intergalactic Tribble show hosted by The Tribble Fanciers Association on a yearly basis.

It's an invitational competition and holds awards for agility, obedience, agility, melody and Best in Show.

The location of 'Furs' is always held on Risa, at the exceptional Grand Key resort and spa. It attracts many thousands of visitors every year. 'Furs' caused a significant scandal in 2395 when an 'anti-cruelty to Tribbles' organization alleged the TFA allowed breed standards, judging standards and breeding practices which are said to compromise the health of Tribbles. The FSPCT - The Federation Society for the Protection against Cruelty to Tribbles - stated that it is "concerned about the unacceptably high levels of disability, deformity and disease affecting Tribbles" shown in competition.