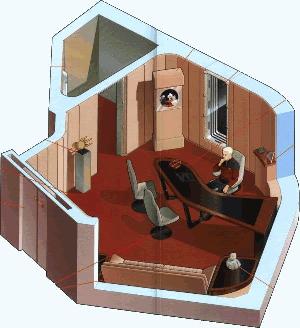 The Captain's Ready Room is the equivalent to an Office. Here, the Captain will take private messages and have one-to-one conferences with staff without impeding the duties of the other Bridge staff. This Office is perhaps one of the only places on board where the Commanding Officer can fully relax when on duty. It is located on Deck One on the left side of the Bridge. The duration of a command post can be lengthy and a Captain or a Commander has permission to add personal touches to their Ready Room suiting their desired taste.

Aboard the USS Thunder, the current Commanding Officer is Toni Turner

Upon taking command Of the USS Thunder, Captain Turner has requested her Ready Room be refurbished to her tastes. The room is held in bright, airy tones and has a clean and minimalistic flair. Among the personal items in the room is a picture of her children, Vee and Garth on her desk. Further displayed on it's surface is an antique Sextant, a gift from Fleet Captain Riley upon her promotion to captain. On a shelf over her workplace is a stuffed bear, Captain Turner received from Commander Vetri.

The walls are otherwise held in light tones and are bare, though above the cream sofa is a collection pictures of her dog, Jax, a black German Shepherd. Other personal furnishings include three models set upon fair colored pedestals along the walls. The first is an Nova-class Ship in memory of her very first command, the USS Resolution. The second is that of an Akira-class Ship in memory of her second command, the USS Ronin. The last model displayed is one of an Cheyenne-class in honor of her current ship the USS Thunder.