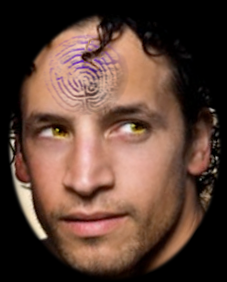 Sahmson is a member of a relatively out of the way species known as the Rinanovians. Rinanov was conquered by Romulus some 50 years ago and used as a source mostly for minerals and labour.

Rinanov itself has a somewhat peculiar history. A Federation expedition travelled to the world, under the supervision of the Romulan government, forty years ago and found that its population probably underwent a bottleneck about 200 years ago. Because many Rinanovians were either averse to speaking with Terrans or had apparently been removed from any areas the Federation team chose to visit, the precise nature of the bottleneck remained a mystery for some time afterward.

Owing to recent testimony from Sahmson himself, and to analysis of tissue and blood samples he provided, we now understand the cause of the population bottleneck. The phenomenon was artificial in nature, generated by an increasingly litigious population, whose members had splintered off into disparate gender interest groups. The result was a deep distrust between men and women owing to easy access to legal power to file lawsuits for or otherwise prosecute any perceived injustices members of one gender might have committed against members of the other. Terran sociologists were struck by the similarities between that period in Rinanovian history and a period lasting from the 19th through late 21st centuries on Earth.

It seems the Rinanovians decided to engineer a solution to this problem by modifying Rinanovian psychology. A labyrinthine secondary sexual characteristic was grafted onto all members of the species, which mesmerized them and drew them much more strongly toward one another. Records found along certain segments of Sahmson's DNA were successfully decoded and found to contain audio recordings concerning a "crowd sourced sex drive re-actuation" initiative. It seems the initiative had been scheduled to end after 150 Terran years, but Romulan incursions into Rinanovian territory and political unrest at home resulted in the project never completing and all Rinanovians still being born with the so-called "marks" on their foreheads.

This discovery, not to mention the very achievement of the marks themselves, hints at what was previously an extraordinarily advanced society of genetic engineers and information scientists in general.

Sahmson's history, while well-documented, it currently not available to the public. Involvement with Starfleet Intelligence and certain segments of the Romulan military has resulted in a press black-out for the time being, owing to a recent incident while he was a member of Starfleet.