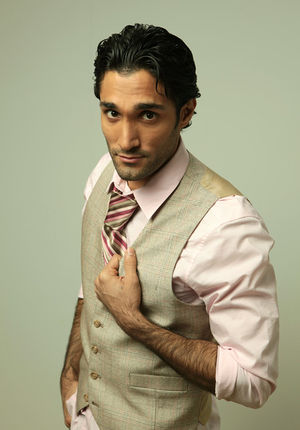 Reza Kardgar is a journalist and the former editor-in-chief for the Federation News Service. Over his career, he has covered a wide-range of stories including the Vaadwaur Occupation of Deep Space 17 in 2387, of which he was a survivor.

Following the station's liberation by Starfleet through Operation Bright Star, Kardgar wrote about his experience in an award-winning article and served on the design committee for a memorial to honor the victims of the occupation. When two members of the Federation resistance--Staff Sergeant Jennifer Brockton and Corporal Tashaun James--were awarded the Medal of Honor posthumously, Kardgar arranged a breakfast with the media for the other members of the resistance who were to attend the ceremony.

His controversial decision to allow an open letter from Maquis Reborn leader and terrorist Nikael Kalre to be published on the anniversary of the attack on Ohmallera, Betazed, was met with severe backlash against the Federation News Service with calls for his resignation from protestors in early 2392. Deciding that he had become a distraction to the Federation News Service's mission to report the news, not become it, he stepped down on SD 239204.05, with Lara Senekal as his interim replacement.

Articles by written by Kardgar