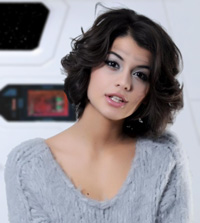 Renia Lenai is a 32-year-old Haliian scientist and a former member of the Maquis Reborn.

She had been a postdoctoral student who worked as a research assistant for Professor J. Cowens of the Orion Institute of Cosmology. A brilliant young mind who earned her undergraduate degree at the age of 19 and her doctorate at 22, Dr. Lenai came aboard the USS Mercury in 2390 with Professor Cowens as the newest additions to the ship's large civilian research contingent to study the Menthar Corridor.

Unlike the more cynical professor, Dr. Lenai seemed eager to work with the Starfleet personnel aboard the Mercury as she completed her research. Following the Professor's untimely death during the evacuation of the Mercury's lower sensor module in late 2390, Renia lay low, quietly withdrawing from the Orion Institute in early 2391.

She returned to the Menthar Corridor later that year as a member of the Maquis Reborn, under the leadership of Nikael Kalre, who took control of the station as their first strike against Starfleet and the Federation.

By 2397, she'd severed her ties with the Maquis Reborn, and her whereabouts were unknown.