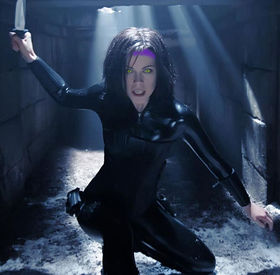 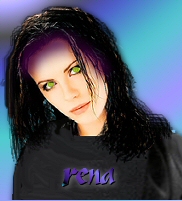 Rena in her days with Gaev

Rena was born Renika Athgard in the town of Byrne in the kingdom of Devi. At a young age it was apparent that Renika had a strong fielding talent. She was more sensitive that any of the other students in school and had a hard time using traditional means to to control her talent. So at the age of ten the Athgard's gave their daughter to the coven. There young Renika was made into an apprentice and then after years of training and discipline it came time for her to become a novice coven leader the word of alien worlds came and the power of the monarchy was thrown into doubt. Renike left her coven and joined the Royalist Army, she was a quick study and was promoted to speical forces. When the revolution began and the military broke into different cells she was made force leader and given a team. They ran high risk missions aimed at taking out the alien loving terrorist leaders. Below is one such mission;

Rena in The Revolution

:: Renika Athgard crouched outside of the compound, this was a bold mission but the royalists needed a victory over the terrorists. ::

Beni: Force Leader, we have been able to take out their guard posts no one can warn Yorganson that we are coming.

Athgard: Good, this will be a great victory for us, once we take out Yorganson the movement and this whole damned revolution could be over!

Beni: Yes ma'am, this is indeed a great day.

Athgard: We move in now relay orders to kill them all to the rest of the team.

:: Rena's team set charges around the door and with a ear shattering blast the battle had begun. Surprised anti-aristocrats were caught off guard and most didn't even make it to their weapons.::

Athgard: Swarm into every room and leave none alive, Beni and I are going after Yorganson.

Beni: You heard her move it, kill all of the traitors to the throne.

::Renika and Beni found the path to Yorganson's office surprisingly free of guards they broke into the command center to find it deserted::

Beni: What is this a trap!

Athgard: No they have all fled, those dirty Alien loving traitors ran way.

::She paused, and moved toward a wall and began feel around the edges::

Beni: What is it?

Athgard: It's a fake, beyond this wall there are five of them, I can sense them. Help me find a way to get it open.

:: The two royalists scanned the edges of the wall looking for a way through but they found no switch no opening nothing.::

Athgard: We are taking too long there is only one left!

::She stood back and motioned for Beni to do the same. She raised her weapon and set the output to maximum within moments the wall was gone and the two entered to find Spen Yorganson bent over a trapdoor he slammed it shut and stood to face them. ::

Yorganson: What ever you think you have done here you will fail our world will take it's place in the interstellar community.

Athgard: Typical talk you are all traitors to the throne, and once you are dead your petty revolution will be over.

Yorganson: Do what you will with me but I know the people will continue to fight.

Athgard: Fine what I will to do with you is simple.

::She fired and the man fell to the ground, she bent down to examine the body, she found a padd clutched in his hand it was flashing the words DESTRUCT ::

Athgard: We need to get out of here!

::The building exploded in a bright blaze that lit up the sky. History stated that all of the invaders were killed and that it was Spen Yorganson who had sacrificed himself to save the anti- aristocrats.::

After the raid Rena awoke buried under rubble, she broke out and laid low while she giving her broken bones a chance to heal. The revolution was over quickly and then the offworlders came back. Angry at what had become of her world she took on a new persona and on the eve of the federation embassy's grand reception she bombed the building. It did not help her at all in retrospect seeing as Starfleet took over and built a new embassy. Rena now is a thorn in their side a reminder that not everyone welcomes them.

Ensign Brell Reporting This will be my first and last security profile update, I have been transferred to engineering but the fact that the infamous Rena was captured while I was a part of the team is something I will remember as a highlight of my career. Rena a terrorist is currently comatose in the Federation Embassy Medical Unit awaiting transfer to Starbase 118. Her capture will help calm the dangerous element face ing the embassy team.

Sub-Commander Lovalk Reporting Rena has been extradited from the federation and placed in the custody of the Tal’Shiar research facility on Duronis II. Major Faelal Awaits another willing participant in her study of the Laudean’s fielding ability.

In 2388 during the uprisings that followed the destruction of Romulus and Remus she was liberated from the Tal'shair facility, she located the apartment owned under alias Valtina Youn in unharmed condition, Youn had been listed as missing and she was happy to say she was of the many held by the Romulans, as it gave people even more reason not to pry into her comings and goings.

2389 having recovered fully from the her ordeal of being subjected to Romulan experimentation, pushing her fielding to the limit for hours on end every day as her Tal'shair overseer hyper stimulated her with drugs and electro impulses to her brain had of course taken it's toll on her. She made contact with Gaev after learning of a growing number in the population who opposed the regime and wish to return to the old ways and doing it without alien influence. She knew she could count on him to help her fund her ambition to turn the people into a full blown armed militarist separatist movement. She started in provinces that had high numbers of naturalists party voters and found many eager to sign up to her cause, she traveled from province to province laying grass roots and setting up cells, leaving them with a leader and cypher to decode orders she sends.

2390 Arriving back in Lokesh city she knew she would be with this cell for awhile to come. She knew once she was ready she would once again be able to disrupt the federation's control and influence on her world. This cell would be different it had to involve netting politicians, raising public support over time, and propaganda campaigns she relished the goal. She founded a charity organization The Romulan Occupation Orphan Fund as an efficient front. Often as Valtina Youn she has attended high level events and parties and put on fundraisers for the charity channeling much money of the money to the TFL. She has lead the Lokesh cell to spread their word and awaits their chance to scale up their demonstrations while she stockpiles explosives and hand weaponry.

2391 The kidnapping of Val Daysa, was the chance she had been waiting for. The Ti’ahn For Ladeans groups took to the streets around the city and set up a presence outside the federation embassy on her orders. She owed Gaev a great deal for tripping her off in advance, she had flyers prepared with images of the embassy's ship the Thunder with crossbones over it and the message “If this can’t protect our prime minister, then what is it here for!” And other leaflets with a group of Laudeans kicking a starfleet officer out an airlock, with the Text. “They are doing us NO GOOD, Til’ahn For Laudeans”. She had members ready to distribute these throughout the city in bars, shops, covens and gathering places the moment the news broke. Attendance in the groups “informal” meetings rose each day Daysa was unaccounted for. She and her Lieutenants in the Lokesh cell leadership await the chance to begin more violent demonstrations.