Laudean culture has many gestures to indicate all kinds of ideas:

Wealth: Used to refer to an abundance of wealth. (See SIM)

The left hand is held out flat with the palm facing the ceiling. The right hand is closed into a fist and brought into contact with the palm of the other hand as if hammering it. The clenched fist is lifted it away, and unclenches until the fingers are splayed wide and the fingertips point towards the ceiling

Blits The officials have come up with a conversion (see SIM 155): 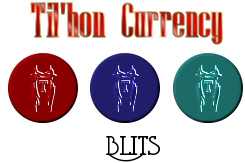 Futbash - is a game similar to baseball and soccer combined. It is played amongst trees and a field where each tree is similar to a goal and the basherbat is carried and used to move the ball like field hockey. The challenging point of the game is timing strategy. It is mostly played by advanced Fielders using several energy balls at once in rotating team exchanges. The team to have synced the energy balls into their opponents goal is the winner. The energy balls are moved by the bashers kicking the ball at the bashers with the basherbats and in turn they hit them together where they are combined into a larger energy ball.

The Circus has a series of acts featuring acrobats, dancers, clown-like displays, animals etc designed to produce as little in the way of artificial energy fields as possible.

A man kisses, a woman is kissed; a lomale is ever changing.

If both parties are male they hold their hands outward with the palms up (similar to the traditional Vulcan gesture). They then touch the palms together.

If one Laudean is female and the other male the routine is the same, only after they touch palms the male Laudean kisses the woman on the cheek.

If both parties are female they touch palms (as above) and then both kiss one another on the cheek after touching palms.

The Mid-Wife is in charge of the ritual and normally only her the mother and the father are present, and sometimes a Mid-Wife Apprentice will observe.

The mid-wife lights special sweet smelling oil incense that releases endorphins into the air, putting all in the room at ease. Next, the mother is propped up with pillows under her legs and back. Then the Derma is poured on the mother, which numbs the area, allowing the infant to exit smoothly. The Mid-Wife now begins to palpate around the womans middle to insure the baby is in the proper position. While doing this, she chants a poem in the Ancient Laudean language. The poem is lyrical and sounds like a lullaby; in fact the poem is about the first birth, according to Laudean creation myths. She continues to repeat the chant until the baby has emerged. The umbilical cord is then cut using a conventional laser scalpel. The Mid-Wife then blesses the baby by placing the symbol for welcome on the infant's forehead, bringing the ritual to a close.