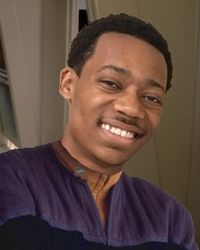 Selrus was born and raised within the Shoals, and began studying programming at the Starfleet Annex of Star Station Esperance. After two years of successful study, he was assigned his first position as a programmer to Outpost 3, one of only two Starfleet officers to assist in it's initial repairs.[1] After two months, Selrus was injured by a falling bulkhead, breaking his forearm. Without necessary medical equipment available, he was required to wear a magnabrace for five days and was on considerably restricted duty, until the arrival of the USS Veritas, where he was able to receive proper medical attention. During this time, he began building the software required for the outpost's computers.[2]

As the youngest member of the repair team, Selrus is often considered innocent and inexperienced. He lacks confidence when under pressure, and becomes easily flustered when the Outpost is visited by the Veritas captain.[3] Though he requires guidance in these situations and does not have much experience in other areas of engineering, he has proven to be a reliable assistance and eager to learn.