Click here to see detailed profiles on each host 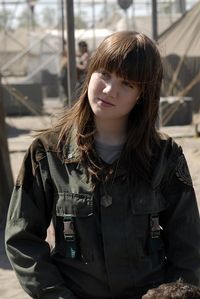 Rissee, in her test pilot jumpsuit

Despite being only 30 when she died, Rissee was an exceptionally talented engineer, but an unexpected propulsion lab experiment that went horribly wrong ended any hope to see her career flourish. Rissee chose the Kiax symbiont to help further it’s knowledge of the sciences, and what with Korrul being a biologist, a good knowledge of physics was sure to further the path of Kiax down the path of the mind. Rissee only spent three years with Kiax, but the veritable wealth of information that Kiax now wields is staggering. Though a very sociable person, Rissee tended to bury herself in work, only occasionally attending parties hosted specifically for people in engineering to mingle and exchange ideas.

The longest living host of the Kiax symbiont was Vilug, who was a prolific philosophical author for over 85 years. While he started out writing works of fiction in his mid-teens, he quickly transitioned into writing non-fictional papers about societal reform, much of which was adopted into Trill law soon after its publishing. This garnered much attention from the symbiosis commission, who quickly accepted his application for joining. He was offered the Kiax symbiont due to his powerful mind, but after joining, having absorbed the experiences of two previous hosts, Vilug decided that he would move away from the sciences and continue to pursue his love of writing, to give Kiax a more rounded appreciation of arts and culture. He lived a long and prosperous life, dabbling in various forms of art over the years, but ultimately staying loyal to his roots as an author.

Born in a small township far beyond the borders of the major cities on Trill, Ezres found work as a teenager working as a clerk in the local town hall. Her work ethic and general popularity found her favour with the staff, and after completing her undergraduate degree in politics, found success in the initiate program by the time she was 25. She continued to work for political establishments until she was 50, where she took up the head of a colony administration to put her years of experience to better use. She remained a popular administrator for the colony until she turned 75, whereafter she retired, spending her twilight years with her husband, children and grandchildren.

Lilla grew up with sports, competing in several youth games during her childhood, and always well supported by her friends and family. Eventually deciding to specialise in Triathlon, she competed in the 2272 Federation Games, finding much success in the process. After spending the next three years in the initiate program, she passed through with much success. With the experiences of Ezres now fresh in her memory, she decided that settling down and raising a family was more rewarding than she previously though, and proceeded to do the same, while still competing at the highest level until her late thirties. Following this, she transitioned into coaching, and spent a lot of her time advocating the sport to the younger generations. Sadly, Lilla tragically died in a climbing accident when the rockface upon which she was climbing broke away, resulting in a 1000ft fall. Nothing could be done for Lilla, but the symbiont was miraculously saved and taken back to the Mak'ala Caves until a new host was found.

Kara trained as a lawyer on Trill, but felt her true calling was elsewhere. After enlisting with Starfleet, she made waves in Starfleet Academy with her unusual talent for settling disputes between cadets. So much so, both the JAG Corps and the Diplomatic Corps offered her postings upon her graduation. She settled with the Diplomatic Corps, and spent a good few years settling disputes between colonists and the federation. She was joined in 2350, before becoming the Trill Ambassador for a short while. The lavish lifestyle suited Kara, and she did much good between Trill and other non-federation worlds. She was particularly well known for her opulent social gatherings, but never felt very comfortable in the role. She gave up the post after receiving a request to serve as Chief Diplomatic Officer on the USS Enterprise-E. She helped work diplomatic channels throughout the Dominion War, before retiring in 2379, leaving the ship as it orbited Earth for the wedding of William T. Riker and Deanna Troi.