The Kevel system is a star system located near the Romulan Star Empire's border and is claimed by the Romulan Republic. The system is home of seven planets though the only one of interest at the moment is the second planet, Estava.

Kevel I is a hot, rock averaging 410k (136.85 C) and has not been found to have anything of use. In the late 2355, the Romulan Star Empire had established as four man listening post that was later abandoned after a year.

Estava is the second planet in the Kevel System and is the home of a Romulan Republic mining colony.

The only gas giant in the system, Kevel III is the home of fifteen different moons that are not large enough to really be classified. A Republic automated listening post has been established as part of Estava's defense.

Kevel IV is a small abandoned rock with no resources or tactical value. Mostly composed of igneous rock and slate. 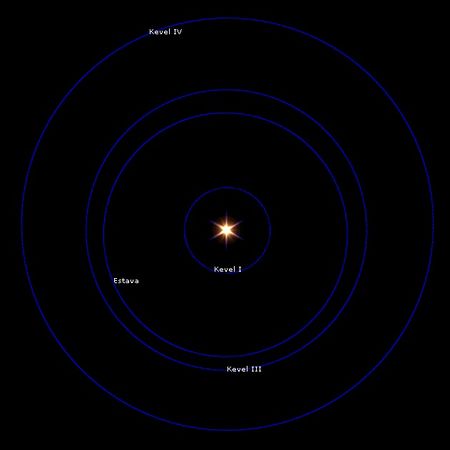