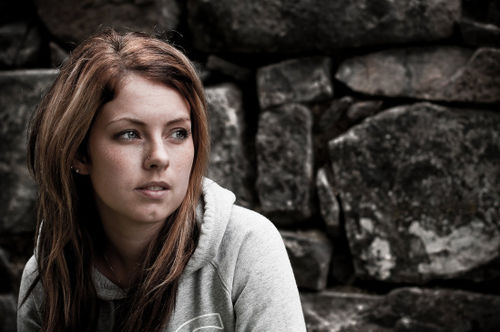 Kaerae ap Rhys is an HCO Officer serving on board the U.S.S. Gemini.

She has four piercings in her face: her nose, her left ear and two in her right ear. Each of these is made from a non-magnetic composite metal. Her spirited way of movement is not graceful, though far from clumsy. Some have described her motions as ‘tomboyish’, though she is clearly feminine in her outlook.

Kaerae’s parents were high school sweethearts. They had been together for almost ten years at the time of her birth. She was welcomed in the world by two people who deeply loved her from her first cries. As much as they loved her, the love between the two of them had died a slow death over the years before her birth. When she was two years old, Inir left Ieskje for his new lover. Kaerae remembers little of her father as a part of her core family. Despite his departure, he did not move far from Ghent, living in Brussels for years. He has always tried to keep an important role in Kaerae’s life, but over time his role did lessen.

While her father had remarried, her mother remained alone. Raising a wild-spirited child on her own was hard for her mother. Kaerae herself remembers only that she would try to seek a response from her mother as often as possible. After a few years, her mother intentionally started to seek out the company of single men, rotating them through the house as bed partners. As a child, Kaerae understood little of her mother’s ‘needs’, though she was instinctively troubled by her mother’s behaviour. This did not improve when she got a sister, Mette, when she was five years old.

Often left to fend for herself and her sister, she had little time for making friends at school. Instead, she spent much time on her own, reading and chatting using digital interfaces. She scored reasonably at school, though teachers often noted that she could perform much better. Her mother worked long hours and spent what little time she had with company she kept. Kaerae dealt with it as a child would with any situation; she accepted them as her reality and worked with it the best she could.

For high school (middle school), she decided she prefer to attend school in Brussels. Here she found a tri-language school (Dutch, French and English) that offered high-level education. At first, she used the regular shuttle service from Ghent, but soon found herself spending nights in her father’s house. Though she never truly became close with her father’s husband, she did accept him. The stability of a married household worked its magic on her while she was in the early classes. She decided that her mother’s behaviour was not acceptable or normal, which lead to numerous conflicts over the years.

School itself was mostly about fun for Kaerae. She achieved acceptable grades, though many teachers expressed the sense that she could be doing even better. Instead of homework, Kaerae spent a lot of time pursuing a large diversity of interests. Over the course of three years she tried at least ten different sports, five art forms and a number of side projects. At fifteen, the three major activities for her included gardening, acting and skating. These remained with her for the last three years of her school time.

In her fifth year, she met Maxime, a transgender girl. They got a long very well and participated in a lot of projects in the Brussels area and performed together on stage. Increasingly unwilling to play any male roles, Maxime requested that Kaerae take these parts. In pursuing this, Kaerae developed the role of Kay and immersed herself for several weeks in a male personality. Not only did the play go down extremely well, Kaerae received very positive reactions from many friends on her ability to show a male gender. From that day on, she has regularly gone back to being Kay for brief moments. Yet for her, it always stayed a role.

After high school, Kaerae travelled around the alpha quadrant with Maxime. They took odd jobs on various colonies and places, but had a hard time fitting in. They found they had the same taste of men, but they never squabbled or became bitter to each other over such differences. Kaerae was twenty three when she returned home, rich in experience yet no closer to knowing what she wanted to do with her life. Maxime, on the other hand did know and joined several interest groups and focussed efforts on education.

Kaerae eventually decided to join Starfleet. She felt that with a broad curriculum it could give her the experience she needed. While some Cadets achieved academic success, experienced great personal development, Kaerae’s run through the Academy was uneventful. If anything, she reverted to her tendency to underperform. Her main challenges were the stressful situations she experienced. She had to redo several of the combat training simulations because she choked halfway through. Despite that, she entered her final year with solid, average scores.

The most interesting experiences for her were a small string of boyfriends she had during her tenure. Though she had thought herself committed to each of the relationships she started, each of them ended after a number of weeks to months. She avoided sleeping around like her mother and never got a bad reputation with her fellow Cadets. If anything she was known as ‘unlucky’.