Joanna Wilde is a Federation Ambassador and pain in everyone's side! 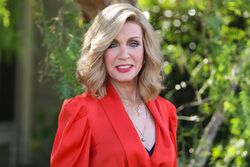 Born into luxury by 24th century standard, she married Sidney Wilde for love and had two children. When she was younger she wanted to be a fashion designer but she took a position at the Diplomatic Corps because she 'had the hots' for the Betazoid Ambassador. Over the years she climbed the ranks to Federation Liaison and later full Ambassador. She enjoys the social life her role provides for her, and for a spry 60-something year old - is very ignorant to the fact that she is loud and somewhat scandalous. She spends a lot of time off-world, which she enjoys but she tends to miss her husband after a while. She has a loud and proud personality, and can be very embarrassing to her children.