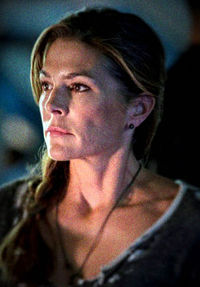 Gabriela was a doctor on one of the border worlds until her entire family was murdered. Now she is a high ranking colonial extremist who will stop at nothing to get the attention of the Federation who she feels has abandoned the border worlds.

In 2393, Gabriela and a group of colonial extremists hijacked the quantum slipstream starliner Charles Lindbergh, taking Trill Chief of Staff Anari Kthria and the other 3,300 people aboard hostage.

Gabriela is played by Kait, the writer for Nikki Ryan.