Physically similar to the Vouaht, roughly humanoid generally around 2m tall. Their skin tones range in the dark and light blues, grays, purples, and yellows are generally aquatic looking, but decided less so than the Vouaht. The Vouaht has a series of longer tentacles around their heads which tend to 'slay out' when excited, frightened, or otherwise have a series highly emotional. Both males and females will often wrap with ribbons, rings, or other ornamentation.

Unlike the Vought, the Ewo have evolved to breath the M-class atmosphere of their home planet.

Casual onlookers will see more than a casual resemblance to the Vought, possibly indicating a shared evolutionary path.

Ewo names are in the form Surname Given-Name.

Ewo speech patterns are inverse from most humanoids. For instance: 'Peace, we offered. Rejected offer and murdered us, you did!'

The Ewo travel the galaxy via a series of ancient, massive, graviton catapults they, and the Vouaht have both discovered and laid claim to. Most Ewo vessels can be classified as freighters, carrying dozens of larger other vessels. The first encountered Ewo vessel was approximately 30km long and roughly cylindrical in shape and carried other ships in its hold to move them place to place. 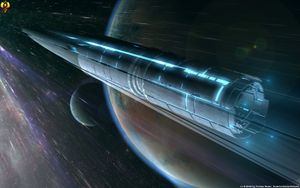