"Forget the past, we will build the future."

The Eminian are a species who suffered through a 500 plus year war with the ungrateful colonists who settled Eminiar III. Still it was a simulated war, run by computers with casualties voluntarily reporting to disintegration stations.

When the Eminian finally conquered space and developed space craft capable of both transporting large numbers of people and traveling throughout their system they established a colony on Eminiar III. They continued to ship out thousands of people each year. Almost all of these colonists were members of the Vend Min Kan, a group with different cultural and religious beliefs than most of the rest of the population. Eventually all of the Vend Min Kans were transported to their new colony as well as a number of other smaller cultural sub-groups. Each sub-group settled in a different location on the planet and they developed into small nation states with their own governments and policies.

Eminiar III continued to receive support, equipment and supplies throughout the entire process that lasted approximately 87 years. After this the colony had to start shipping back goods and natural resources to pay for the expense of starting up and establishing the colony.

Eventually sometime around the early 18th century the ungrateful colonists started to call themselves Vendikans and renamed their world Vendikar. This seems to coincide with an increase in their negative behavior. The amount of complaining they were doing increased and they objected more and more about having to repay their debts to their home world with natural resources and other goods.

Shortly after this the colonists declared independence, stopped supplying goods and natural resources and illegally seized all of the ships currently docked on their world. This was obviously an act of war that outraged the Eminians. Since the Vendikans obviously wanted war, they would get a war and the Eminians started to shift their production over to building warships and weapons.

By the late 18th century war had broken out between them and the colonists, a war that lasted more than 500 years. The conditions of this war were stipulated in a treaty signed by both worlds in 2031. As a result they shifted from fighting a real war to fighting a simulated war with casualties determined by computer projections, and the people willingly killing themselves in disintegration stations. Legitimate targets in the war included vessels orbiting the planet. The reneging of this treaty by either side could result in a real war.

In 2217, the USS Valiant visited this planet. During its visit, the star cruiser and its crew were declared casualties of this war. The Eminians successfully destroyed the ship and killed its crew.

In 2267, the USS Enterprise visited the planet Eminiar VII. During the visit, when his ship and crew were threatened with destruction, Captain James T. Kirk ended the war abruptly by destroying the computers. Ambassador Robert Fox began work with the two planets to establish a lasting peace.

These efforts broke down in 2282 and it looked like both worlds were gearing up for war. As a result a new Ambassador was dispatched to attempt to mediate their problems in the hopes that war could be adverted. His vessel was attacked and damaged and would have been destroyed if not for the intervention of the Arkarian.

One of their heavy cruisers happened to be close by and was able to intervene. As a result it was discovered that the Orions had established trade deals with both the Vendikar and the Eminian to supply them both with weapons and advanced technology.

Ambassador Suvok was able to use this information to open up a new series of peace talks. It took almost 3 years but a clear and positive result was achieved, one that not only meant peace for the two civilizations but a start to healing the rift between them.

By 2304 they entered into a joint commercial and defense pact that had them establish long term trade and joint military operations within their system. Surprisingly this joint endeavor has lasted and gradually morphed into its current form with a permanent joint military and an economic system so interwoven as to be practically a single entity.

The Eminian appear to be normal humanoids with a remarkable similarity to humans, both in variety of shapes, heights, weights and hair color but all of them are Caucasian in appearance. Citizens have earned the right to wear black with a tan sash. All others will wear clothing that does not have any black or tan anywhere in it.

As with most intelligent species they can and sometimes do suffer from various different types of mental illness. Unfortunately while they do have an excellent treatment program, they have a negative view of those who suffer from these medical conditions and as a result they will be sent off to facilities in remote locations and secured there until they have been cured.

Most of the people believe that the male aspect of the creator gods is the superior deity, having more power and influence over the people since he created them and nurtures them as the god of the universe they live in. The female aspect however is treated more like a distant, uninterested relative, content to watch and observe from the world below them.

During their 500 year plus long war with the Vendikan they slowly deleted most of the data files that contained any and all of the wealth of educational and thought enhancing tales, fables and legends that were a part of the heritage of the colonists that settled on Vendikar and were now the enemy. Now only those fables, legends and myths that originated for the most part from their own cultural background remain. 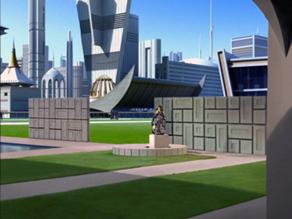 Their cities seem to be picture perfect, well planned, with access to all of the needed amenities such as education, health care, recreation, transportation and utilities. Crime is almost unheard of and punishments are severe and swift. Visitors are respected, treated well but while the people are friendly and relaxed they tend to be reserved and formal around strangers.

All of their music follows certain rules of composition that makes the tunes flow in a regular and stately manner. As a result dancing to their music usually takes the form of intricate, stately and slow moving affairs that reflect a calm almost regal manner. The same can be said for all of their other forms of artistic expression.

They celebrate holidays that coincide with changes in the alignment of the planets, moons and other stellar bodies. These also reflect their beliefs that the male aspect of the universe as a deity is worthy of worship and celebration.

The civilization is advanced, having had pre-warp space flight for more than 800 years, but it had elected not to venture outside of its solar system while locked in armed conflict with the Vendikan. Since the end of that war they have flourished and grown, supporting numerous research programs and making steady progress at developing new advanced technologies.

Currently they have developed such an intricate web of economic supply and demand with the Vendikans that for all practical purposes they could be considered a single people again. As a result they have one of the strongest economies in their region of space.

As of 2371 the governments of both the Vendikans and the Eminian entered into a new age of co-operation. A complete merging of their entire military, now individuals from both worlds serve on the same ships together and in the army.

Due to the religious beliefs of the Eminian who worship the creator god who dwells in space, all officers and personnel serving in the space fleet wear black with tan accoutrements and silver insignia. Due to the religious beliefs of the Vendikan, who worship the creator goddess who dwells with in their planet, all officers and personnel in the army wear green with tan accoutrements and gold insignia.

The Eminiar evolved on Eminiar VII and shortly after they developed successful space craft capable of traveling with in their system sent colonists to settle on Eminiar III. More and more colonists were sent to live in the colony and eventually they started to call their planet Vendikar. Early in the 18th century war broke out between the two worlds.

In 2217, the USS Valiant visited this planet. During its visit, the star cruiser and its crew were declared causalities of this war. The Eminians successfully destroyed the ship and killed its crew.

Eminiar VII had been fighting a war with its colony, Vendikar the third planet in the system, for five hundred years. The conditions of this war were stipulated in a treaty signed by both worlds. This was a simulated war with causalities determined by computer projections, and the people willingly killing themselves in disintegration stations. Every year, on Eminiar, one to three million were killed by this process. Legitimate targets in the war included vessels orbiting the planet, a fact that caused James T. Kirk considerable difficulty during his visit 2267. The reneging of this treaty by either side could result in a real war.

Both Memory Alpha and Memory Beta were used as references as well as the following TV episodes TOS: A Taste of Armageddon, TOS: By Any Other Name, DS9: The Muse, DS9: What You Leave Behind and DS9: Call to Arms. The movie Star Trek VI: The Undiscovered Country was also used.

Last of all the Star Trek 2 novelization: A Taste of Armageddon was also consulted.

Content from this article may have
come partially, or entirely from
Memory Alpha
Retrieved from "https://wiki.starbase118.net/wiki/index.php?title=Eminian&oldid=322183"
Categories: