From 118Wiki
Jump to navigation Jump to search
Note: This page is currently under construction.
This notice was placed here by Zephyr, so go bug them to finish the page if nothing's happening.

The USS Chin'toka is also equipped with a large complement of 5 Peregrine-class Attack fighters, 5 Valkyrie Mk-1 fighters, and six Workbees.

These are a more streamlined design, having a pointed front and larger warp nacelles, however it has less internal volume. It can be crewed by a single person if necessary but is outfitted for two pilots and four passengers. It has the greatest range of the shuttlecraft aboard Chin'toka, with a maximum speed of warp 4. It is specifically designed for deep-space scouting missions, even though they are actually smaller than the Type 6.

‡ Selected crafts were approved on Stardate 239801.31 for further testing of a Reskari alloy, which had previously proven effective at protecting occupants from tetryon radiation.

The USS Chin'toka has a complement of 3 of these shuttles. Each one is named after a composer of classical music from races present at the Battle of Chin'toka.

A far more streamlined design than the type-9, one of the most recent addition to Starfleet's array of shuttlecraft. Based on a runabout's design, the Type-11 is twice the size of the Type-9, boasting a dorsal docking clamp and airlock. Type-11s are more heavily armed and shielded than the older shuttlecraft. It also is equipped with a transporter.

The USS Chin'toka has a complement of five of these shuttles. All five are named for Earth civil rights leaders.

The Argo Class Shuttle is one of the newest class of shuttle in the Federation, This shuttle is known to be one of the marines favourites. The Argo was designed with recessed warp nacelles and fold-down wings. These wings were designed to assist in atmospheric maneuverability. The shuttle was equipped with an all-terrain buggy that could transport up to three passengers over rugged terrain. The buggy was secured aboard the shuttle's cargo hold via wheel clamps. The shuttlecraft could also be remote controlled from a device on the buggy.

The USS Chin'toka has a complement of two of these shuttles. Each one is named for mythological creatures, mostly from Earth.

The Danube features a front cabin for the crew of pilot, co-pilot/navigator and two mission specialists. A two person transporter is at the rear of the cabin, with swappable mission modules aft of this. The modular nature of the Danube allows it to be configured for missions such as personnel transport, cargo transport, scientific research, tactical, medical, etc.

The USS Chin'toka has a complement of four of these runabouts. Named after Bajoran rivers. Two of which have not been named yet.

Developed as a complement to the larger Arrow-class, the Volga-class runabout represents a compromise between providing smaller Starfleet vessels with long-range runabout support and the limited shuttlebay space which is usually available on such ships. Smaller than the type-11 shuttle, the Volga is classified as a runabout due to its ability to independently sustain a crew for a longer period of time and at a longer range.

While large runabouts serve a valued purpose in supporting massive exploration cruisers and starbases, the limited space and maintenance facilities available on smaller starships have kept them from widespread use as auxiliary craft. The Volga-class represents an effort to remove that barrier.

The USS Chin'toka has a complement of four of these runabouts. They are named after various rivers in Federation space.

The Peregrine Fighter was Starfleet's first attempt at a heavy fighter design. It was developed in 2367 and designed to help in fleet actions by causing the enemy vessels to split their fire amongst multiple targets, whilst delivering a powerful punch itself. Capable of a top cruise speed of warp 4.5 it has a similar speed to that of a Valkyrie, allowing it to operate short distances away from its homebase or carrier vessel. However, it is common practice for these vessels to be used at impulse.

Although these ships come in several different models, Starfleet uses the two-man heavy fighter variant. This design has two type U+ pulse phaser cannons as well as the type IV phaser. Optionally six full-sized photon/quantum torpedoes may be used in addition to this - although this has an adverse effect on the ships maneuverability.

The USS Chin'toka has a complement of five of these fighters. 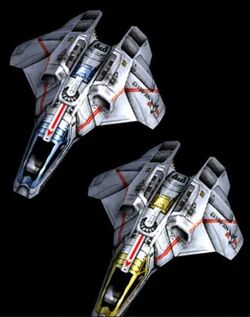 These are the latest additions to the compliment of auxiliary craft for the Chin'toka. Smaller and more agile, Valkyrie class ships will be used for a variety of missions, from planetary assault to spacecraft interdiction. Unlike the Peregrine, the Valkyrie class is intended to be used in small groups, where a local shield can be projected and shared by the fighters during an attack run. Each small ship contributes a portion of its resources to the group shield, thereby savings power to divert to weapons and repair systems.

The "Workbee", or more accurately a cargo management unit (or CMU), is a small utility craft in use by the Federation from the mid-23rd century onwards. The CMU is a single-occupant vehicle with seating for the pilot only. Generally, the pilot needs to be spacesuited, especially if the pilot is planning to perform a space walk. The front of the CMU features several large windows. The craft also has a large headlight at its extreme forward end for illuminating a work area.

As the CMU is primarily a maintenance craft, it can be equipped with a variety of tools, including a set of dual remote manipulator arms called the Grabber Sled. The CMU can also serve as a tug for cargo modules with the Cargo-Train Attachment.

The CMU can operate both in the vacuum of space and within the atmospheric and gravitational conditions of a starship cargo bay or planetary surface.

The USS Chin'toka has a complement of six Workbees, named: