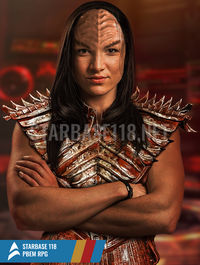 Ch'otonn Bagorgh is a 32-year-old female klingon. General Bagorgh was born and raised in Qo'nos, and until 2395 spent all of her life living there. She was a decorated general in the Klingon Defence Force, and was a rising star destined to eventually leading the KDF - much to disgust of several more traditional houses.

During a major KDF military exercise, her battle tactics were leaked by a member of her crew to opposition forces. As a result her Battle Cruiser was ambushed and she suffered a heavy loss - her ship was the first to be eliminated from the war game within twenty minutes of the exercise starting. Her honour and reputation as a warrior, and that of her entire family, was brought into question. Under pressure from several houses, the fractured Klingon High Council narrowly chose to re-assign General Bagorgh to Klingon colonies in The Shoals as punishment for her embarrassing loss.

Ch'otonn is proud to be a Klingon but is disillusioned with the current state of the Klingon Empire. Since living in the Shoals she longs for the "old days" where the Empire was feared by the Federation. Ch'otonn is known for using offensive language (even by Klingon standards).

After arriving on VoqmoH'tuq, she immediately aligned herself with the chevwI' tlhIngan separatist group and became its eventual leader, turning an ideology into a cause.