Caleb Alexander is a Security Officer currently serving on the USS Apollo.

Caleb Alexander was born to a working-class family, spending his childhood years alternating between school and the floor of the Starfleet Manufacturing and Assembly Facility where his father worked the assembly line for the alloy housings of the Type II phaser. While a manufacturing floor might seem an inappropriate place for a young boy, Caleb had a distant relationship with his mother and grew to enjoy his time around the blue-collar workers. As he grew into a young man, Caleb would take an important lesson from the working class men and women. Too often, the technology of the 24th century made it easy to forget that the toils of nameless workers were still a necessity in their world.

It would have been only natural for Caleb to take up his father's work, but Tomas Alexander had a certain dream for his son, and would accept nothing less. Caleb - at his family's urging - applied for and was accepted to the Accelerated Law Program at Earth's Stanford University. In his third year of the six year program, Caleb had been academically and personally successful, when he received he received word that his father had passed away at the age of sixty-two. Caleb spent one more year at Stanford, finishing his undergraduate education and the first year of his legal education. Despite his success, an unshakable understanding struck the young man when his father died, and it grew in him relentlessly from that moment on - he was only there because it was his father's dream, and his father was gone. Caleb left the program early, parting ways with a girlfriend and a host of friends as he did, turning away from the life that had been selected for him.

In the ultimate act of rebelling against a dream that was not his own, Caleb Alexander enlisted with Starfleet, taking a four-year commission aboard the USS Bondar, an Akira-class vessel active along the Dominion Neutral Zone. Here, he worked in the vessel's armory performing weapons maintenance and requisition duties. Caleb rose to the rank of Crewman First Class and earned a Combat Action citation, but did not make it far beyond his eighteen-month promotion. Little more than two years into a four-year commitment, Caleb again felt a restlessness rising up inside of him. Wanting to use his new-found knowledge as well as his education, he sought and was granted a commission with Starfleet Academy. Once more, Caleb left behind a group of close, battle-forged friends and an on-again off-again romance to begin a new chapter in his life.

Starfleet Academy was a natural fit for a now adult Alexander. Though he was older than most of his classmates, his experience as Starfleet enlisted and his prior education gave him an excellent background in the subjects that mattered most to him, and he excelled in general academics as well as security and tactical training. He was hardly a master of the entire breadth of the Academy, however. His engineering knowledge was limited to that which was necessary to run tactical systems effectively, and his performance in scientific coursework could at best be described as "passing." Though he did have many successes in the Academy, it was only the instructors who could vouch for him - his classmates would have little to say, since little was all they really knew about him. Alexander departed the Academy for his final exam squarely in the top quarter of his class with a double major, Security over Tactical, and no minor. 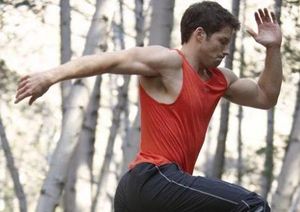 A quick run on the starbase holodeck

Caleb spends most of his free time outdoors, where he enjoys a variety of environments from snow-covered mountains to lush, humid jungles. He tries to spend time planet-side whenever possible, though he considers holodecks an adequate enough substitute. His favorite activities include trail running, hiking, and camping. When Caleb is unable to escape his quarters or finds a quiet moment on duty, he enjoys reading Terran drama novels.

Caleb has very few persistent physical habits, though he does idly crack his knuckles at almost all times - often without realizing that he's disturbing the silence of a room. In frustrating situations, he can often be seen biting into the corner of his lip as a personal coping mechanism.

Ever since he was a young man growing up on Earth Caleb has been tattooing his body with symbols and images of personal importance. The majority of his chest, back, and arms are covered with tattoos in shades of black and gray, and he's always willing to explain their significance. Because his tattoos are not ethnic or religous in nature, they are covered at all times by his Starfleet uniform, in accordance with standard regulations.

As Caleb had never left Earth until he was in twenties, the majority of his favorite foods are Terran classics. He is particularly fond of spiced cajun pasta, seared scallops in buttercream, and merlot drenched filet mignon. While serving in Bajoran space he did develop a fondness for Bajoran Hasperat. Caleb usually only drinks water, though he does have two grave weaknesses: Terran aged scotch and dark Terran coffee. 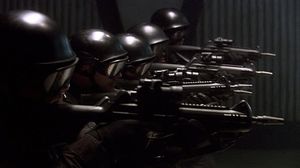