These runabouts are outfitted with equipment and instrumentation which can be used for a variety of tasks and missions. Arrow class Runabouts utilize the same "modular" construction in regard to interior makeup. They are compatible with standard Starfleet multi-use compartment modules and are much easier than even the conventional Runabouts being that the warp engines and wings feature a "gull" design which swing open for easy access to the interior. The compartment modules fit neatly inside and lock into place for optimum refit capability. The Arrow class is slightly longer than the standard Danube. This affords a somewhat roomier cockpit area, more work stations, and a larger crew complement. The Cockpit and each module may be used as Emergency Escape Pods, complete with independent Life Support systems, RCS Thrusters and Combat Rations. Should the need arise for Emergency Egress, the entire warp engine section may be jettisoned, freeing all the Modules for independent flight.

The Arrow class on board the Blackwell are all equipped with the "Medical" module loadouts. 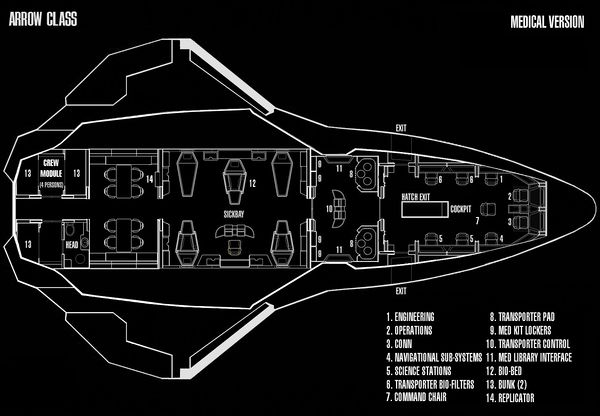 Type-11 shuttlecraft have two engine nacelles attached to the ventral sides of the main body of the shuttlecraft. The cockpit has one large forward facing window and two smaller windows on each side of the craft. They are also equipped with dorsal docking clamps and an airlock, and are also able to fire tachyon bursts from the rear of the craft. The cockpit has two forward facing seats positioned side by side, and also one seat on each side of the craft behind the pilot seats. A transporter is located in the rear of the cockpit.

These are a more streamlined design than most other shuttles, having a pointed front and larger warp nacelles, however it has less internal volume. It can be crewed by a single person if necessary but is outfitted for two pilots and four passengers. Four of the Type-9s on board are the standard version, while the other four have been modified for Cargo transport.

The following craft are assigned to the USS Blackwell and are designated as Type-9A:

The "Workbee", or more accurately a cargo management unit (or CMU), is a small utility craft in use by the Federation from the mid-23rd century onwards. The CMU is a single-occupant vehicle with seating for the pilot only. Generally, the pilot needs to be spacesuited, especially if the pilot is planning to perform a space walk. The front of the CMU features several large windows. The craft also has a large headlight at its extreme forward end for illuminating a work area.

As the CMU is primarily a maintenance craft, it can be equipped with a variety of tools, including a set of dual remote manipulator arms called the Grabber Sled. The CMU can also serve as a tug for cargo modules with the Cargo-Train Attachment.

The CMU can operate both in the vacuum of space and within the atmospheric and gravitational conditions of a starship cargo bay or planetary surface.