From 118Wiki
(Redirected from Bajorans)
Jump to navigation Jump to search

Bajoran history can be loosely split up into ages. It is worth noting that the Bajoran civilisation is among one of the oldest in the galaxy, dating back some 500,000 years.

In 2370 a xenophobic terrorist movement known as "The Circle" seized control of the Bajoran Provisional government under the leadership of Minister Jaro Essa. Despite the coup eventually being reversed, it had lasting repercussions on Bajor due to the election of Kai Winn, whose involvement with Minister Jaro aided her campaign a great deal. The Circle’s motto was “Bajor for the Bajorans”, reflecting the introverted nature of the Bajoran people, but amplifying it into something twisted and violent. The official political party whose motives were embraced by the Circle was known as the Alliance for Global Unity.

The table below contains significant dates present in Earth-Gregorian format.

The Bajoran world government runs on a democratic system. Ministers are elected into power, as are the First Minister (government leader) and the Kai (Spiritual leader of Bajor).

The main assembly hall in the Bajoran Chamber of Ministers.

Initially established as a provisional entity to govern world and interstellar politics, the Bajoran Provisional Government is led by the First Minister. All day-to-day policies regarding Bajor, including the judiciary system and diplomatic assignments are co-ordinated through this organisation. The government is also in direct command of the Bajoran Militia. Ministers are elected through democratic means. The seat of the Government is in the Chamber of Ministers in the Bajor capital.

The Vedek Assembly holds considerable sway over the planet’s legal and cultural administration. The Kai and the First Minister often consult each other, and while their jurisdiction does not often coincide it is important for both leaders to be of an agreed political standpoint as often as possible. In 2371 Kai Winn became the first leader of the Vedek Assembly to ever serve as First Minister. After the Cardassian Occupation, the Vedek Assembly was the only official organisation with any political standing left on the planet until the inauguration of the Bajoran Provisional Government in 2369.

Bajorans physically resemble many of the other humanoid species of the galaxy, bearing a strong resemblance to Terrans and Betazoids. Their most distinguishing feature is a series of around five horizontal ridges on the bridge of the nose. Other key physiological differences include a heart that is mirrored along a horizontal axis rather than the vertical axis seen in the Terran heart, and a gestation period for Bajoran infants of only five months, accompanied by frenetic and uncontrollable sneezing rather than morning sickness.

Originally peaceful and introverted, the Bajoran people were somewhat uninterested in contact with other species. Despite one of their solar sailing craft arriving in Cardassian space as a result of tachyon winds near the Denorios Belt, Bajorans made little attempt to explore and colonise worlds further than their own system. They were neither friendly nor unfriendly with other species, instead showing courteous hospitality to those met. However, after 40 years of occupation under the Cardassian Union, the mindset of a large proportion of the Bajoran people has significantly altered. Most tend towards being courteous and hospitable, but there are many whose attitude reflects the violation that their people suffered, leaving them quick to anger, stubborn and impulsive.

Bajorans share an extremely strong bond with their homeworld. It is written in an ancient proverb that “The Land and the People are One.”

The Bajoran judiciary system is not dissimilar to that of the Federation. Representatives are called to present their case to an arbitrator, who considers their evidence and witness depositions before making a ruling according to Bajoran law.

The Bajoran culture is widely regarded as one of the richest in the galaxy, having had around half a million years to evolve and prosper. Bajorans have two names - the first is the family name, equivalent to a Terran surname. The second is a given name, equivalent to a Terran given name. Bajorans refer to each other by their family name unless permission is given to use their given name as a form of address. For example, a Bajoran named Kenara Jor would be referred to by most people as “Kenara” and by friends and family as “Jor”.

Bajorans enjoy a variety of different foodstuffs, the most popular of which are hasperat (a spicy wrapped dish resembling a Terran burrito), kava juice, and Spring Wine, a blue-hued alcoholic beverage brewed from kava.

Bajoran weddings are spiritual affairs, including readings from scriptures and roles for each member of the spouses' extended family. Wedding receptions tend to be long drawn out parties that can last for days, where neighborhoods are inclined to eat, sleep, dance, and come and go repeatedly until the party calms down on its own. If weddings are scheduled close to other its possible the reception for one will blend into the next.[1]

The Earring of Li Nalas.

Bajoran earrings are an indication of their faith in the Prophets. They also served other purposes, for example it has been assumed that they served to signify the D’jarra of the wearer. Many Bajorans have personalised their own earrings, indeed Kira Nerys was able to identify the earring of Li Nalas after it was delivered to Deep Space Nine by the Boslic freighter captain Rionoj early in 2370.

D’jarra refers to a caste system that was in operation on Bajor during the Second Republic. Bajorans held different standings in the community based on their professions, and artists and other culturalists were held in high regard by most citizens. There is evidence to support that earrings were a symbol of D’jarra, although this is not conclusive.

Art is held in high regard in Bajoran culture, and children are taught from as young as four years old. Artists often held a high position within the D’jarra system.

A popular musical instrument on Bajor is the belaklavion, which is not dissimilar to a Terran clarinet in appearance. Its timbre, however is more akin to terran panpipes. The Jalanda Forum was a popular location for musical performances and dramatic entertainment up until the Occupation. Bajoran music is largely based on quartal harmony, giving it a spacious and meditational feel.

Bajoran embroidery is a unique style of needlepoint that consists of techniques established and cultivated since the beginning of the First Age. Originally limited only to those of the religious clergy, the art soon spread to usage among the clothes of those in higher castes. Eventually, it became an art form, and Masters of the technique were highly praised and highly sought after. Traditional Bajoran embroidery often includes recurrent themes, from the beauty of nature, to scenes that narrates a story, and holds a lot of symbolism within the culture.

At first, only threads in one colour of different shades were used, and these can often be found on ancient clothing of past Kais and Vedeks, and then only upon hara fabric, a type of Bajoran fabric woven from the silk of an arachnid, the ruahara, known in Standard as the Bajoran spider. Silk was coaxed from domesticated specimens, then spun and woven into fine, soft fabric.

Eventually, more and more colours were used in embroidered creations, though those used for religious purposes tended toward the more muted hues. Over time, embroidery began to include more than simply colours of thread. During the Second Age, ribbon and even fine threads of metal began to find use in different styles of embroidery, and various areas of Bajor had their own unique styles.

As time passed, clergy garments used embroidery less and less. Eight thousand years after the Second Age, only the Kai’s garments would continue to use embroidery. In the last few hundred years, embroidery has been replaced by printed patterns upon the fabric, though occasionally more formal and traditional garments and certain ceremonial and special decorations might display some.

Even today, a few families in the higher castes still own great family trees on which members of the family have their name embroidered on a branch when a new child is born, or when someone marries.

In modern times, Embroidery is still a respected, but dying art, and very few Masters remain.

A popular fable on Bajor is the ancient tale of Bintor Zavin. Bintor was a fisherman who saw a giant b'ath rayl, a ray type creature, in the water and thought it was a sea monster come to devour the world. He proceeded to sell all of his possessions and went far and wide telling all who would listen it was the end of the world, hoping to stay ahead of the sea monster. He died outside of Hathon, broke, old, sick, and within sight of several b'ath rayl hanging in the marketplace, for sale, as food. Bintor's tale is told as an object lesson not to jump conclusions or act without all the necessary information.[2] 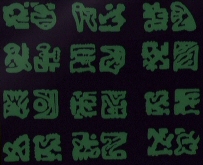 The Bajoran language is written in the form of ideographs.

The Bajorans are less concerned with interring the remains of the deceased than they are with guiding their pagh into the afterlife. A Bajoran death chant can last up to two hours to allow for the recitation of the sacred text. In addition a duranja, or funerial candle, can be lit to act as a memorial for a loved one or friend.