The Bajoran Marauder is a type of Bajoran vessel used in defense and escort.

This heavily-upgraded Bajoran fightercraft is owned by Lt Commander Victoria Yladro and is currently located aboard the USS Constitution-B.

In 2381.08, during a covert mission disguised as Maquis, Yladro and crew journeyed to DS9 - enroute Yladro found an enormous stash of gold-pressed latinum in various denominations. Yladro was recognized by Quark from a wine bottle label design featuring her cariacture - apparently her uncle's winery on Sol III found a supplier to DS9 - and after pressing Yladro for a photograph for his nephew Nog, Yladro turned the tables on the infamous barkeep and requested to purchase her own small spacecraft. Knowing that visiting Andorian, Tamlovt, had one stored in his freighter, Quark brokered a deal costing 9 bars and 10 strips of gold-pressed latinum, a mere fraction of what Yladro had found. Purchased with a functional propulsion and life-support system sans weaponry, Yladro and Keely took the small vessel back home to the USS Constitution-B.

While the original Bajoran hardware was adequate for short distance combat twenty years ago, Victoria's needs for extreme maneuverabilty and performance required the removal of the original propulsion system and the majority of the other Bajoran components as necessary to upgrade many of the old systems. The revitalization project was handled completely by Lt Keely Lah'rel. The project began with the gutting of the vessel, removing almost everything within the spaceframe to leave an empty shell. Lt Keely utilized surplus parts and systems from one Type 8 Shuttle and three Type 6 Shuttles. In the aft section that would have normally housed the inefficient Coanda-cycle chemical/air-ram system, Lt Keely Lah'rel installed a micro-warp core and impulse drive taken from a surplus Type 6 shuttle components. Lt Keely fitted the Type 6 warp nacelle elements within the undercarraige of the vessel and replaced the weaponry, computer, RCS, SIF and IDF accordingly. Due to the adequate design and lack of availability of alternate Starfleet surplus components to fit within the small spaceframe, the vessels original life support system, helm control and communications systems were reinstalled and enhanced with a Type 6 computer core. Lt Keely also added new components that fold the atmospheric wings upwards which enables the vessel to land and be stored in relatively tight spaces.

In 2383 the enhanced vessel was fitted with a prototype ion emitter cannon (capable of frying electromechanical devices). The new weapon was successfully used to avert a full-fledged Borg attack on Duronis II. 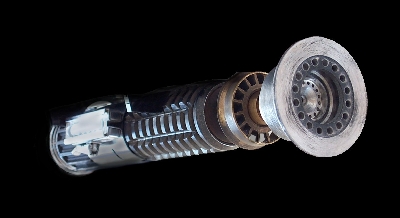 This is an old fighter/raider from the latter end of Cardassian occupation of Bajor, used by the underground and later sold to various merchants. Having gone through extensive modifications, the operational capabilities of this spacecraft far exceeds its intended usage, thus meriting the appropriate re-categorization of "marauder". With its ability to fold-up its atmospheric wings after landing and therefore compressing/compacting its footprint, the Marauder is currently stored in the Workbee area aboard the USS Constitution-B.

On 238406.10, Lt Commander Yladro took her Marauder out for some competitive flying in the outer orbit of Risa, but due to system issues and extreme maneuvering that overloaded most of the systems, the Marauder broke apart over the upper atmosphere and slammed into a mountain range. It was later discovered that the ship was sabotaged at the behest of Admiral Axel Sennheiser but the 3rd party responsible for the illicit work 'overdid themselves' and the resulting modifications caused the ship to crash. Unknown and unconfirmed: Admiral Sennheiser has been seeking a replacement Bajoran fighter/raider for Yladro as a gift for unknowingly assisting him in completing a covert anti-terrorism mission aimed at averting a socio-political disaster on Betazed. Purportedly, with the uncharacteristic heartfelt generosity of Sennheiser's gift, someday the Gypsy Legend will fly again.