A science laboratory (for short, lab or science lab) is any area set up for work in experimental or observational science. The USS Avandar has multiple labs. The information can be found below regarding these. 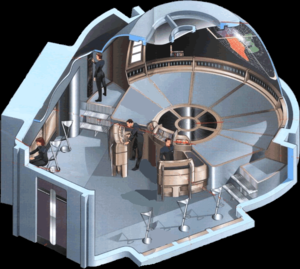 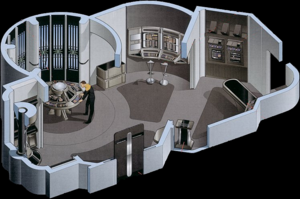 The Chief Science Officer's Office is located on Deck 9 close to the labs. The CSO's Office receives data from all science areas on the ship.

Astrometrics is a specialized lab used aboard Federation starships for stellar cartographic purposes. Onboard the USS Avandar these labs are joined into one and can be found on Deck 2.

Astrophysics is a branch of astronomy that deals with the physics of astronomical objects in the universe. One who studies in this field is known as an astrophysicist. Onboard the USS Avandar these labs are joined into one and can be found on Deck 9.

The Arboretum is a botanic garden found onboard. Crewmembers may use the Arboretum as a recreation area where they can relax in a natural setting. It is also an area of scientific research.

Cybernetics is the study of hugely complex artificial intelligence systems, usually running on a positronic matrix and often housed inside robotic machine technology. A practical implementation of this is an android. The scientists who study in this field are known as cyberneticists.

Geology is the science involving the study of the natural landforms of a planet or other celestial body with a solid surface. One who studies geology is known as a geologist or exogeologist.

Hydroponics is the growing of plants in a medium other than soil, such as a nutrient-rich liquid.

The Hazardous Materials Lab is on Deck 11. It's used for the storage and research of dangerous materials such as explosive, toxic, highly corrosive or flammable materials or severe biological threats such as viruses. The lab is equipped with extra protection and security protocols to make it a safe place to conduct experiments that would be deadly if something went wrong. These measures include reinforced walls, extra scrubbers for air filtering, sensors monitoring the internal environment, forcefields, hazard suits, specially designed containers and storage facility.

The lab is controlled inside and out via consoles. The research area has a console built into one end of the table to allow various functions to be performed whilst within a quarantined research environment. There is a warning light at the entrance to the room that indicates if the room is being used. If the room is in use, permission must be gained before entering.

The Sensor Pod is accessed from Deck 5 via turbo lift to Deck B. A Sensor Pod is a module that can be connected to the dorsal surface of a starship to extend a starship's sensor capability. The pod lets the ship perform multiple types of scans at the same time.

A probe is an automated spacecraft used to gather information. Probes are often used for tasks that starships are not suited to handle.