Adru was an aquatic planet in the Lanith system. It was home to the Adruan, an amphibious species. It was completely covered in water and was the only known source of the healing liquid, laktum. Laktum was so important to the Par'tha Expanse and surrounding areas that the Adruan were able to use it to enforce their neutrality policy. The only above-surface settlement on Adru was the floating city of Kinba. When laktum was replaced in favor of other technological advancements, the economic demand dried up, and the Adruan left Kinba City for their ancient cities in the depths of their oceans. Adru had very little contact with the rest of the Expanse since that time. 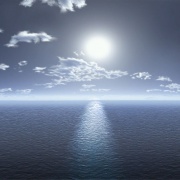 The lunar pull of Adru's two moons constantly ensured that the entire surface was covered with water. Kinba City was the only surface city and spaceport. Since it was the only settlement accessible to offworlders, the only way to the true surface of the planet was in a submersible kept in Kinba City.

Canyons lined the ocean floor, and atop the canyons lay long rifts that were lined with numerous deposits of laktum. One of these rifts, the Komina Rift, was home to a giant dridalum shark known as the First One. The unusual natural energies emitted from the rift contributed to the First One's tremendous size. The First One was also somehow connected with the flow of laktum. It in turn fed on the laktum, further increasing the creature's size. Its offspring, the dridalum sharks, protected their mother and inhabited the rift, attacking anything that attempted to endanger the reef.

Deep undersea caverns served as homes to the native aquatic species, and the sentient Adruan built their cities, deep-sea pods, far beneath the surface. The closest pod to Kinba City was the Foron pod.

Adru had one sun, and its skies were as blue as the oceans. The planet was home to several avian species, flocks of which could usually be seen flying over Kinba City. The Adru protected their oceans and their skies with as much integrity as anything they did. If the environment was harmed, the parties responsible could be banned, imprisoned, or even executed, if the crime was severe enough. Luckily, few dared to tamper with the ecosystem, and if they did, they would be met with the wrath of the First One.

Adru was once a prominent member of the Par'tha Expanse, thousands of years before the advancement of medical technologies. For the last hundred years or so, however, they have remained relatively secluded.

The First One, possibly due to her immense size, became a legend to the Adruan, who believed her to be not only the source of the laktum, but perhaps even the origin of their species. She also gave birth to many smaller dridalum sharks, who helped her to protect the rift and its hidden treasures.

A thousand years ago, Adru had established itself as the sole provider of laktum in the galaxy. In order to serve the needs of non-Adruan visitors, the Adruan built the huge Kinba City, which was so large that it could be seen from orbit. Laktum was in high demand due to its powerful healing properties. In fact, Adru's entire economy revolved around its exportation. Many other worlds and governments wanted an alliance with Adru, to try to corner the laktum market. Instead, Adru adopted a state of neutrality. And if any faction decided to invade the planet, the Adru threatened to destroy the laktum supply.

A few of the Adruan made a secret deal with the Caraadians, allowing them to build their own laktum harvesting base on the ocean floor. Unfortunately, the location chosen for the station was the Komina Rift, and the First One was none too pleased by the invasion of her territory. Somehow she drove the Adruan in the base and the dridalum sharks outside the base insane, and they attacked and killed all of the other personnel. The operation was a disaster, and for some time the universe outside of Adru did not know what had happened.

Adru continued to extract laktum, but the supply mysteriously started to decline. As a result, the price of laktum sky-rocketed and the galaxy abandoned laktum and Adru in favor of new healing agents and technologies. Forced to lower their prices, the Adruan lost their greatest bargaining chip. The Adruan attempted to join the Freeworlds at this time, but corruption and complex interests barred the aquatic world from entering the unofficial interstellar union. With no other options, Kinba City was abandoned by the Adruan, and they returned to their underwater cities beneath the surface. Due to Adru's isolation, the Adruan began to grow primitive, warring with rival cities.

With the decline of the laktum market, the Adruan were forced to work much harder to re-establish themselves in the galactic arena. Laktum was used as a cheaper alternative to technology.

Adru, being an oceanic planet, hosted numerous aquatic species in its vast seas. The Adruan were originally aquatic beings, having lived in the oceans in their earlier, prehistoric eras. As the Adruan developed and evolved the ability to live outside of water, various other species prospered in the depths of the Adru oceans. The dridalum shark became the prominent species, though several other aquatic animals and plants could be found within the ocean. The First One seems to have been the basis of life on Adru, being the "mother" of evolution on Adru. The Adruan believed the First One to be the mother of their species and regarded her with much respect, not only for being the protector of their laktum, but for guarding the ecosystem as well. If true, then the Adruan were also related to the dridalum sharks. This is further supported by the fact that when the First One screamed, it drove both the dridalum sharks and the Adruan insane.

Ever since recorded history began on Adru, the Adruan were known to be pacifists, refusing to condone violence of any sort. This resulted in the birth of their long-lived and brutally enforced, neutrality policy. Their settlements were protected by Mark II Assault robot. The Kinba City Civil Authority, ruled the planet, and employed police robots to enforce their laws. Competition, however, was not eliminated. The Adruan enjoyed renithor racing and various aquatic sports. Renithor racing was conducted in the large, open center of the city, which was filled with water. 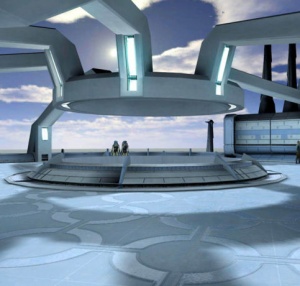 The only city above the surface of Adru's oceans, Kinba City was the meeting place between the Adruan and offworld visitors. It was a tremendous, shell shaped structure that floated on top of the water's surface using a buoyancy system that seemed to incorporate the city's massive center. Laktum would be gathered here from undersea vents and shipped off to those who requested it. Indeed, much of Kinba City was comprised of hangers and distribution centers. Exotic and beautiful fountains dotted the many courtyards of Kinba City. There were also many cantinas, shops, and other recreational facilities present. Other than laktum, tourism was also a major part of Adru's economy. All visitors were given a free map and guide upon arrival. The embassys were located in Kinba as well. 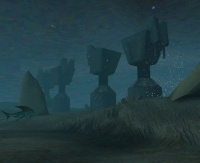 The Komina Rift was the largest source of laktum on Adru. It was home to thousands of dridalum sharks and the First One. The Komina station was also located here. The station secretly mined laktum from the ocean floor. The machinery disturbed the First One, who screeched loudly, driving dridalum sharks and Adruan alike, insane. The Caraadian scientists were killed by the crazed Adruan, and production ceased. Some Caraadian diplomats hired teams of mercenaries to investigate the facility. They too were killed, and the mystery remained uncovered for many years.