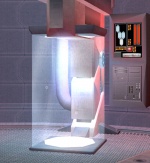 Laktum was a form of healing liquid applied, created on the planet Adru, an aqueous world found in the Freeworlds Region. It was here that a giant creature known as the First One produced laktum; its life inextricably linked to that of the drug.

Laktum could be administered through disposable patches, injection, consumption, salve, or by submersion in a laktum tank. When in a laktum tank, the patient would either be clothed in shorts or a white gown, depending on the person's gender. The method of administration depended on the severity of the wounds. It was imperative that laktum was applied in a solution of clear synthetic fluid which mimics the body's own vital fluids.

Laktum had a smell that was described as 'sickly-sweet'. Immersion in a laktum tank could leave one with the taste and smell of laktum for weeks afterwards, and even laktum patches left a smelly residue (although a weaker smell).

The native Adruans mediated the use of laktum and sold it to both government agents and to independent marketers. An independent consortium deveoped a plan to construct an underwater facility in the Komina Rift and mine for laktum at their own expense. Laktum, being found only in Adru's deep-sea chasms, could easily be mined without detection if one could reach them.

Laktum was still in use in the Par'tha Expanse, though it seemed to have been almost completely replaced by technology. It is unknown what exactly caused the demise of laktum, though various theories existed. One was the suggestion that laktum gradually lost its effectiveness, and that as beings required more and more for the same level of healing the market collapsed. Or possibly the invention of the more easily produced, transported, and portable technologies broke Adru's monopoly on medical supply, which faded into disuse.

Laktum continued to be mined and sold. Those who couldn't afford the higher priced (but more effective) technologies used laktum as a cheaper alternative.