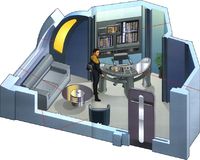 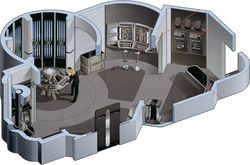 The Black Lab:
Intelligence Lab 1, aptly nicknamed the Black Lab due to its black fixtures, has three main features: Two universal consoles, a replicator and small eating/meeting area, and a Blacknet station. The two universal consoles are connected to the ship’s communications and sensors systems, as well as the ship’s main memory. The replicators use the same database as the main computer and the table sits 6 comfortably. The blacknet station uses its own independent subspace transmitter/receiver and requires voice and retinal recognition, as well as a personalized security code. 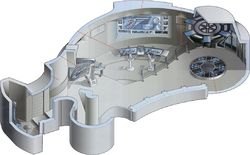 The White Lab:
Intelligence Lab 2, nicknamed the White Lab due to its mainly white fixtures, has four main features: Two universal consoles, an Intel Station, a large viewscreen, and an advanced holo-communicator. The two universal consoles are connected with the ship’s science, tactical, and engineering research and analysis systems. The Intel Station has a unique computer core and operating system that makes the analysis of different types of data from varied sources more efficient, effective, and intuitive. The large view screen is independent from ship’s systems and only connected to the consoles and stations in the Intel Labs. Finally, the White Lab is equipped with an SFI issue advanced holocommunicator. This allows the intelligence officer to step onto the platform and communicate with others who have access to a holocommunicator or holosuite in a mallabe holo-environment.