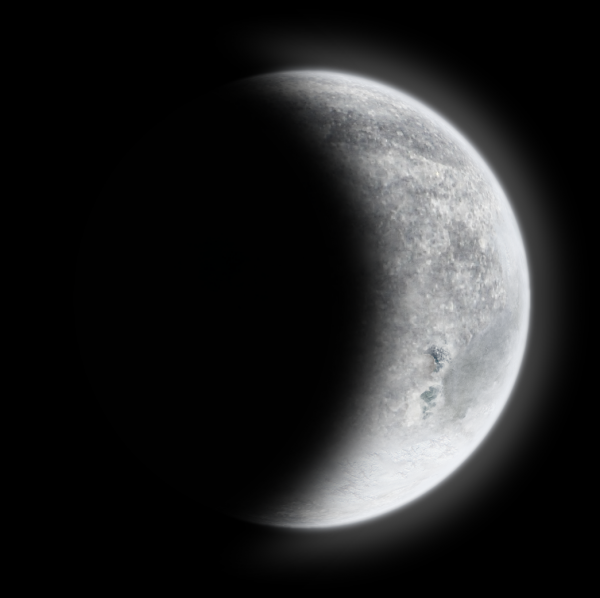 Vedere imaged from a distance of 200,000 kilometres

Vedere is a moon in orbit around the planet Gardato, out beyond Tyberius. The Vedere system is located about 300 lightyears from Romulus and is unique in that the only sentient life in the system exists on the moon, whose orbit follows a path similar to that of the Uranian ring system in the Terran system. 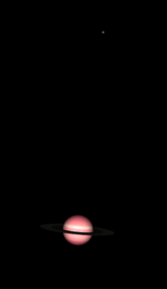 Gardato and Vedere imaged from a distance of 20 AU

Gardato is a ringed gas giant planet orbiting about 3 AU from its parent star, Gardato prime, a class A star. Gardato's ring system consists of densely-populated rocky debris, along with trace amounts of ice crystals, causing its edges to shimmer. The planet's EM field, combined with radio emissions coming from its core, have made it difficult for life to evolve on Vedere. Indeed, were it not for the moon's bizarre polar orbit, life would not have evolved there at all.

Vedere orbits Gardato on an orbital plane that is exactly perpendicular to that of the planet, and which keeps the moon at a constant distance from Gardato Prime. Furthermore, its north pole is tidally locked with Gardato. Thus, throughout its 36-day orbit, the sun follows a bizarre ecliptic in which the sun rises and sets at a different location each day and follows a slightly more curved path along the sky, owing to a paralax introduced by Vedere's orbit. 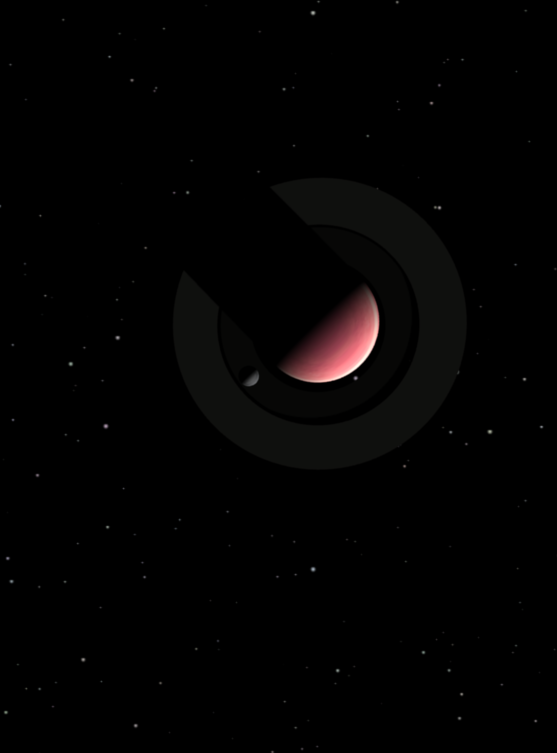 Gardato and ring system observed from a distance of 2 million kilometres. Note transit of Vedere across the planet's southern pole. 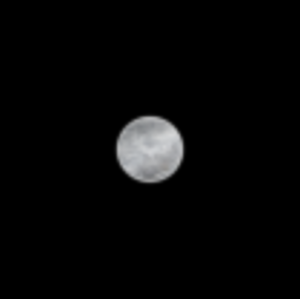 Vedere observed telescopically at a distance of 20 AU

Vedere was first observed by a deep space survey probe on stardate 238712.22. Upon capturing the distant image to the left, the probe's artificial intelligence elected to approach the Gardato system to examine its planets further.

The probe executed a brief flyby of the Gardato system, capturing several images. Notable is the image on the right of Gardato and its ring system. It is hypothesized that the planet once sported a sizable collection of moons which eventually destroyed one another in a tidal tug of war, resulting in the planet's quite sizable ring system. Vedere, whose orbit was always perpendicular to the orbital plane of the other moons, was largely unaffected by the tidal forces they exerted on each other. allowing it to survive as the only remaining intact moon.

The Vederan mean equatorial temperature is a cool 15 degrees celcius. Dustings of snow are not uncommon throughout the year and the moon has no seasons. Because of Gardato's radiation and because of its great distance from the sun, Vedere's effective habitable zone extends from just below the equator to around 30 degrees to the south. Indeed, the inhabitants of do not have a direct line of sight to Gardato and because of the moon's polar orbit it is unclear how or when what we might call post-Capernican astronomy will develop on the moon.

During its low orbit pass above the moon, the deep space probe detected evidence of settlements on the surface. Beyond this, little is known about the civilization living on Vedere. As has already been mentioned, it is unlikely that even the most educated of the Vederans is aware of their place in the cosmos, as it were, on account of the moon's extraordinary orbit. Because of Gardato's radiation it is not possible for an unprotected humanoid to directly observe the planet. Instead, Vederans can only see the rings of the planet as a shimmering line across the sky. A traveller past the equator would first see the shimmering outline of the planet but would soon succumb to extreme cold coupled with the deadly radiation produced by Gardato.

Finally, because Vedere's society is probably pre-warp further investigation of the moon restricted at this time.