The Urbanis System is one of many hidden star systems buried in the briar patch. At times the only way to find these planets is by accident, much like this system was discovered in late 2392.

Encountered in: Chains of Survival

Urbanis I is a small, dead world orbiting closest to the star, bleached white in the 1041F(560.85C) temperature that scorches the surface constantly.

A miracle in itself, Pariah is the only planet in the Urbanis system that is able to sustain life and is warm enough to be comfortable to most humanoid life forms.

For some species, Urbanis IV could be considered hospitable, but it has a strong nitrogen atmosphere high winds that whip across the landscape. It is also a cooler 44F(6C) in the sunslight.

The last four outer planets do not stand out compared to the inner worlds as they are all cold, balls of stone and ice with little to no value to any type of colonization or mining interest.

This is the diagram of the system. 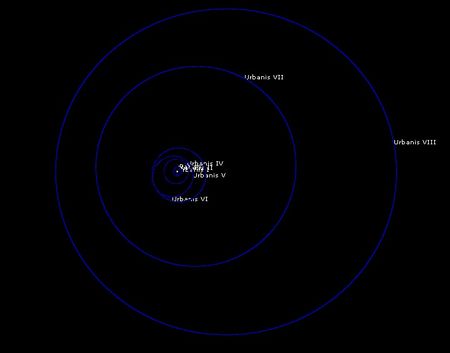