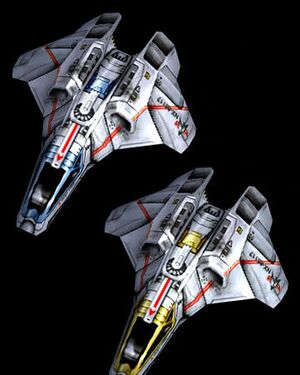 The 417th Fighter Wing was first commissioned in the years leading up to the Dominion War in response to building tension between the Alpha and Gamma quadrant. The 417th saw action throughout the war taking part in three separate decisive engagements attached to Fifth fleet, including the action to retake Deep Space Nine. Losses throughout the war however reduced the fighting strength of the wing to fifty percent, which forced Star Fleet Command to combine the 417th with the 150th Fighter Wing also at half strength. Thanks to a clerical decision the 417th retained is designation even with the consolidation. After the war the 417th was attached to Deep Space 224 to provide protection to the space station and to host a small contingent for pilots fresh out of training.

The Fighter wing consists of Ninety Valkyrie class fighters set in rotational patrols around DS224 and Outpost 89 Delta, under the command of Lt. Commander Perkins “Blue Devil.” Formerly an Engineer aboard Deep Space 39 Sierra, Perkins made the switch to the role fighter wing command after a nasty fall out with DS39 Sierra command. She is known for have a reputation of blunt honesty and acting in the absence of direct orders. The pilots and support crews of the 417th can be found at various points around the station at any given time especially in the Black Jendorvak, which hosts an agility competition known to draw pilots with promise of free drinks.