"We are the terror in the night. Fear us for we are a threat, one you can not stop."

The Suliban (altered) are the genetically altered sub-species who have a reputation as terrorists for hire. Their abilities make them a real threat and has caused the Suliban to be subjected to prejudice, hatred and fear as a result.

The majority of the Suliban people do not ascribe to the beliefs and anti-social behaviours of the fring element that make up the altered.

The Suliban are originally from Sector 3641, but their homeworld became uninhabitable around the Earth year 1851, and most of them became nomadic.

It is unknown exactly when a faction of them were contacted from the future and offered genetic and technological advantages in exchange for becoming agents and terrorists in the Temporal Cold War. This faction became known as the Cabal.

In 2144, the Cabal began carrying out attacks on the Tandarans, a species from a neighboring territory. This led to the creation of detention camps, where the Tandarans would inter the Suliban in their sector, even those who were not members of the Cabal.

In the 2150s, the Cabal began staging attacks within the Klingon Empire, making it appear as if one faction was attacking another, in an attempt to start a civil war. Their plot was uncovered in 2151 and the Suliban Sarin gave relevant information to the Klingon courier Klaang.

Captain Archer and the crew of the Enterprise NX-01 transported him with proof of the Cabal's involvement, in his blood cells to Qo'noS. During the trip they had several run ins with the Cabal. First on the planet Rigel X and finally in a Suliban helix orbiting a gas giant.

In 2152, the captured ship was used to mount a rescue mission on a prewarp planet. Although Commander Tucker believed that he had finally figured out how to operate the cloaking device, he was distressed when the cloak began to fail shortly after their launch. It was then that he realized that power was being drawn from the cloak to the weapons nodes, which he had previously deactivated. Tucker surmised that the nodes were programmed to automatically come back online upon the ship's launch. Despite this, Tucker was able to re-engage the cloak.

In March of 2152, the Cabal destroyed the mining colony at Paraagan II, and attempted to frame the crew of Enterprise for the tragedy. The presence of a Suliban stealth-cruiser was later discovered by Enterprise in a nearby binary star system using quantum beacons provided by temporal agent Daniels. A boarding party infiltrated the Suliban ship and stole information confirming that the Cabal was responsible for the colony's destruction.

In late 2152, the Enterprise NX-01 encountered a Suliban salvage ship while trying to salvage a 31st century time travel pod they had discovered adrift in space. Suliban vessels engaged in combat with Tholian ships, since the Tholians also had an interest in the Cold War. The Earth vessel was ultimately retrieved by those who sent it when Commander Tucker managed to activate a temporal beacon found inside the ship.

In 2152, the Suliban sent one of their shuttles to visit the surface of the planet Kreetassa.

In 2153, after Earth suffered a devastating attack which resulted in the deaths of seven million people, the Cabal abducted Captain Archer from Enterprise and delivered him to a temporal communications chamber. There, the Cabal's benefactor provided Archer with intelligence that the Xindi were behind the attack, and that they were working for another faction in the Temporal Cold War. This gave Starfleet the information it needed to mount a mission to stop the Xindi from destroying Earth.

In 2154, Silik was assigned to stowaway on the Enterprise, when his master learned that Daniels would be sending the ship back in time to 1944 to stop the Na'kuhl, another Cold War faction, from constructing a temporal conduit.

Wanting the ability to physically travel through time rather than just communicate through it, the Cabal's benefactor ordered Silik to steal the conduit's specifications and deliver them back to him. Silik was discovered, however, and eventually teamed up with Captain Archer in order to stop the Na'kuhl.

They were eventually successful in destroying the conduit before the Na'kuhl had a chance to use it, but Silik was shot to death in the process. With the destruction of the conduit and the defeat of the Na'kuhl, the Temporal Cold War came to an end.

Since the end of the Temporal Cold War the Cabal has been keeping out of sight. They eventually established strong relations with the Orion Syndicate. Their services have been available to the highest bidder.

While still operating outside the law as terrorists and criminals they have also worked hard at remaining off the Federations radar. As such most of their activities are restricted to non-member worlds and those operations that ensure high profits and minimal risks.

The Order of Omega was a revivalist Eugenics movement in the 28th century. It used time travel in an attempt to reshape the timeline to a more desireable outcome. One of the founding members was Jamran Harnoth. The organization was responsible for the genetic manipulation of the Suliban Cabal in the 22nd century, as well as a group of Romulans in the 24th century.

The Suliban Cabal was an interstellar terrorist organization active in the 22nd century. The Cabal took their orders from a mysterious figure who was humanoid and communicated from the 28th century. As a representative of a faction in the Temporal Cold War, this individual used the Cabal as his foot soldiers in his attempts to alter history towards his own ends. He communicated his orders directly to Silik, the Cabal's leader.

Since his demise and the end of the Cabal’s participation in the Temporal Cold War the new leadership has constantly maintained a policy of secrecy and cunning. As a result they spend their time working in the shadows as criminals in league with the Orion Syndicate or as freelance terrorists.

This humanoid species has no body hair and their distinguishing physical characteristic is their mottled, greenish-tinted skin.

As payment for their services, the Cabal's benefactor provided members of the organization with the technical expertise to perform a number of genetic enhancements on themselves, including the ability to shapeshift, enhanced senses, and the ability to survive in extreme environments.

Under normal conditions these altered individuals are almost impossible to detect as they look just like normal Suliban. However an intense scan or in-depth medical examination usually reveals the truth.

For the most part the majority of Suliban that join the Cabal show aggressive and anti-social tendencies. They are in it for themselves, to get rich and to hell with whoever has to get hurt in the process, including other Suliban.

For the most part most members of the Cabal are completely without any religious beliefs and in many cases lack the moral fiber needed to consider mercy or compassion as a virtue.

The members of the Cabal have completely turned their backs on their own culture and people. As such they no longer concern themselves with superstitious relics of a long dead past.

They do not have a true society, merely a desire to achieve great things and earn lots of latnium doing it. In this respect they are very like the Orion Syndicate.

The members of the Cabal have completely turned their backs on their own culture and people. As such they no longer concern themselves with the arts except to demand the highest price they can for stolen works of art.

“Do unto others before they can do unto you,” seems to be the watchword and motivating force behind most of their actions. Surprisingly this rule does not seem to apply to other members of the Cabal.

As payment for their services, the Cabal's benefactor provided members of the organization with advanced technology, including biomimetic garments and cloaking devices. The Cabal was in possession of many advanced spacecraft, including cell ships, stealth cruisers, and immense space stations known as "helixes," which were aggregate structures comprised of many different vessels held in place by magnetic seals.

They make their money the old fashioned way, they steal it. Unfortunately this is not the only thing they do. Assassinations, terrorists for hire, smuggling, drugs, etc. You name it and if they think the risk is worth the payoff they will be involved. However they do take great efforts to try and ensure they stay out of the Federations notice.

The Suliban pistol was a hand-held particle weapon utilized by the Suliban.

The two Suliban agents who followed the Klingon courier Klaang to Broken Bow in Oklahoma on Earth in 2151 were armed with Suliban pistols. 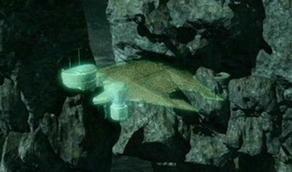 The Suliban stealth-cruiser was a starship used by the Suliban Cabal. It was normally undetectable by Starfleet technology due to its cloaking device. Its armaments included four particle beam weapon banks. The standard crew complement was at least 20.

About the same size as an NX-class starship's shuttlepod, this ship type was used as a one-man fighter and could combine to create a larger structure, such as a helix.

This ship type was equipped with a tractor beam, and could combine to create a larger structure, such as a helix. 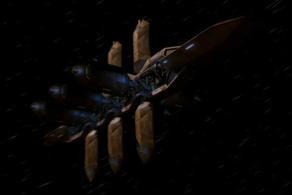 The Suliban salvage ship was a type of starship operated by the Suliban Cabal during the 22nd century.

The ship was minimally armed, with at least one forward and aft particle cannon, making it comparable in firepower to an NX-class starship, but significantly inferior in power to a Tholian starship. They were also equipped with a transporter system and a cloaking device. This type of vessel was capable of exceeding warp factor 5.

The Suliban shuttle is a small spacecraft employed by the Suliban, capable of atmospheric flight and landing.

Several vessels of this design were confiscated by the Tandarans and were kept in a hangar at Detention Complex 26. When Jonathan Archer helped free the Suliban detained at the complex, their objective was to make it to the hangar and escape via these shuttles.

A Suliban helix was a massive spiral-shaped space station used by the Suliban Cabal. Helixes were formed by combining hundreds of cell ships, as well as other cell ship like components, around a central core, and was capable of housing at least 3,000 personnel.

The NX-01 Enterprise discovered one located in a class seven gas giant while searching for the Klingon Klaang. Located aboard the helix was a chamber used by Silik for communicating with his master from the future. The helix's cell ships were separated once the polarity of the maglocks was reversed by Captain Jonathan Archer.

Another helix was later found in a deep red nebula near Paraagan II. It was from here that the Cabal's mission to destroy the Paraagan mining colony was planned. After being captured by the Cabal in March of 2152, Enterprise was taken to this helix, though it later escaped.

Federation intelligence sources have confirmed that the Suliban Cabal is still active although they no longer enjoy a clear cut advantage in technology. They do have connections to all the major crime organizations including the Orion Syndicate.

Any contact is to be reported to Starfleet Command and Starfleet Intelligence immediately.

Also used were the following written works. The TTN novel: The Red King and the ST novel: Watching the Clock.

Content from this article may have
come partially, or entirely from
Memory Alpha
Retrieved from "https://wiki.starbase118.net/wiki/index.php?title=Suliban_(altered)&oldid=265865"
Categories: