This page is still being drafted and some information may change

Each unit consists of a 4 man team (1 officer or senior NCO and 3 enlisted), referred to as operators, tasked with operations both supporting the base and also acting on the wider interests of the federation. Trained in different situations but concentrating on operations behind enemy lines and undercover operations, from CQ to snipping.

There deities usually include surveillance, close protection, deep recon, intelligence gathering, extraction and rendition. Due to the wide nature of SAUs operations and the operational demands they train to operate in any number of personnel if required usually ranging from solo to 8 men, with the expectation of when there is high risk activates like para-shooting or diving where there must be at least to operatives for safety and to ensure mission success.

SAU have several pre-prepared operational aliases from mercenary groups and normal crew members. At least one alias for each member of the team is close to the command staff so that they can operate close protection covertly in a diplomatic situation. When they are operating under cover their identities are removed from the bases computer systems and kept on a secure system in the Marine CIC. Storage of all termpory id as well as their current information is held on off line data crystals so that it cannot be hacked.

For covert operations they have access to selected weapons and equipment that cannot be traced back to the federation but still comply with all the federation rules on weapons. The weapons are equivalent to type I to type III phasers only and are strictly restricted.

Conceded man at arms, SAU do not normally take on other duties like basic guard or ceremonial. Due to their undercover nature operational SAU have a relaxed code of personal appearance but must follow the full marine regulations when in dress uniform or other official marine action.

The exact makeup of the team is determined by its officer but must always include a field medic.

Each member of the SAU has a small, micro transceiver system injected into them allowing them to communicate with the rest of the team with giving away their position through normal comm or voice. The systems carrier wave is designed to look like back ground radiation make it have to detect but also giving it limited range. It comprises of two parts a sub-dermal sub-vocal microphone place next to the vocal cords and a speaker transmits directly into the inner ear so it cannot be over heard.

The sub vocal com system is shown by =S= around the message rather than the normal =/\=. Due to bandwidth limitations the system only uses a single channel so everything said over can be heard by everyone with the system. Everyone using the system is expected were possible to use two way communication procedures as defined by Starfleet. 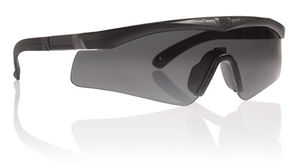 The Wearable Tactical Triquarter (WTT) was re-designed from a standard triquarter, removing the primary interface and replacing it with a 5cm by 10cm flexi touch sensitive screen usually worn on the offhand fore arm. The triquarter has a multi-spectrum passive and active sensors optimized for tactical use. To avoid the misuse of the equipment by the enemy each unit is locked to the DNA and vital signs of the user, plus each unit can be totally locked down by 2 other members in the unit. To avoid back engineering or retrieval of the stored encryption keys the unit is designed to wipe it self and then blow micro-chargers if it detects tampering.

The HUD was designed to work with the WTT incorporating a dual level screen covering both eyes secured by a band that come most of the way around the uses head. The first layer, closes to the user, can either create a full 3d over view or just simple messages. The second layer is smart glass allowing it to act as sunglasses or totally blank out the view, although it can automatically adjust to the lighting conditions it is not fast another to save the user from the effects of a flash. It can be set to blank out the view and show the view on the display so that the team is not blinded by their own flashes. The second layer also can be used to reduce the light coming off the HUD on stealth missions, but some of the reflected light can be seen around the device. Integrated with a compatible weapon it can display ether a weapons view or dot on where the weapon is pointed. The HUD is not capable of processing anything apart from the second layer without a triquorter or computer.

With the success of the Argo’s ATV, the marines looked for a design to meet their needs, including a smaller profile and all round firing position. They came up with the four-wheeled LPV. To reduce the height of the vehicle the driver sits on the floor level with their legs out in front. Behind the Driver sits the gunner in a more conventional position, above the gunner sits a 360 degree swivel gun mount. The gunner’s seat folds up so he/she can stand but loses the safety of the role cage and operate the weapon manually. The LPV can mount a single forward facing Mark 1 micro-torpedo in a disposable lunching tube on one side.

Crew: 2 (one driver and one gunner)