The portion of Solerian Sector originally claimed and settled by the Caraadian people is actually much bigger than the area controlled by Brol Peirs, in what is commonly known as the Solerian Sector. Peirs, even with all his military might, can only project his power over about a quarter of the sector.

The rest of the sector lies beyond a very long stretch of empty space called the A'Alakon Void. Beyond the Void lies the Solerian Reach, a stretch of stars with many small settlements. These settlements include subsistence colonies and worlds populated by refugees, criminals, penal colony convicts, and religious cults.

The starfields of the Reach are dominated by an enormous backdrop of glowing dust, milky-white tendrils of burning gas, and the glowing nimbuses of coalescing solar systems. This majestic cloud, blazing with the light of thousands of young suns, is the Solerian Rift.

The Rift forms the far boarder of the Reach. As far as is known, no one from civilized space has passed through it and returned. There isn't much interest in doing so, either. The people who live in its shadow are more concerned with the demands of day-to-day living and staying out of the way of the mysterious Tiins-la Monks, strange aliens who take a dim view of anyone interfering in their unknowable affairs. 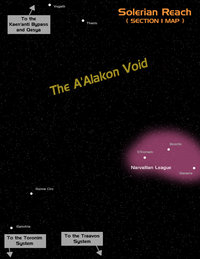 The A'Alakon Void is a stretch of empty space which cuts through the sector, separating the "cosmopolitan" region - dominated by Qesya - from the independent wilds of the Reach.

The "civilized" portion of the Solerian sector ends, for all practical purposes, at the Void. Peirs occasionally sent ships on patrol in the Void and out into the Reach. But after a few years, he realized that it was a waste of his resources.

There are no systems within the Void, and very little space debris. The Void is roughly 15 light years across. A ship traveling at warp 6 would take 14 days to cross the Void; at warp 9 it would take over 3 days. It is not an idle undertaking. 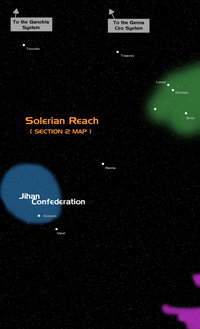 There are many settlements in the Reach, most of them settled by those hiding from someone or something. Other settlers are simply uninterested in dealing with outsiders. Most of these settlers emigrated here to avoid political instability in the Par'tha Expanse, and have never given their history a thought since, or the rule of Brol Peirs. Some of the more prominent trading settlements closest to Lagor Ciro received occasional visits from Peirs' revenuers to collect taxes and ensure they were complying with his laws. Beyond that, military ships (of any kind) were rare sights indeed.

Many of the settlements in the most remote areas of the Reach escaped Qesya's notice altogether. These settlements are in varying stages of isolation. Some worlds don't know that Peirs has taken control of the Sector. Some still don't know there was a power vacuum to begin with. Still others assume that the Great Houses of the Par'tha Expanse are in control, as they were when their ancestors left settled space. Most of the Reach's settlements came about because people didn't much care for galactic government, democratic or not. To the Reachers, any external political force greater than their own is to be viewed with suspicion. 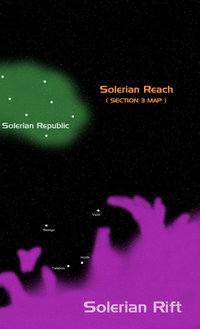 Many of the newer settlements are colonies forged by a charismatic leader - for only such a leader could convince his or her followers to come out into the wilderness to live. Whether religious, political, or military, such colonies are often founded around certain ideals and beliefs. Most of these sorts of colonies are insular, and very distrustful of strangers, especially those representing governments, which they see as an inevitable threat to their autonomy. That is not to say that there are not some worlds which might welcome newcomers.

These colonies and settlements are not known to many outside the Solerian Reach, but many know of one another. Trade does occur between some of these worlds, and a few produce specialty export items. Some few of these items make it back to the Solerian Sector proper via traders who have set up networks of buyers and sellers in the Reach. Other worlds are absolutely isolated, and have not been disturbed in hundreds of years.