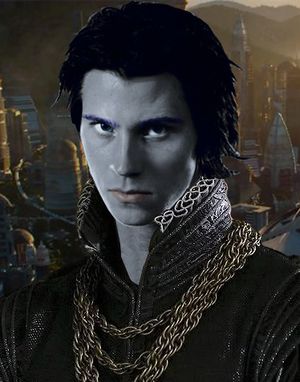 Little is known about his career and origin. His first appearing on Par'tha Expanse theater was during the occupation of the orbital starport on Devron system, at Beruna Province. He was sent to observe the negotiations for admission of some Caraadian nobles to the Valcarian Imperial Republic, which in return offered the Devron system.

He is a tall person with a sleek frame, and a steadfast way of walk. The Advisor is considered extremely austere and objective person, and apparently, he lacks any kind of emotion. He was never observed consulting any kind of visual or handheld equipment, what led some subordinates to conclude that he has an eidetic memory. Several witnesses claim that he uses a kind of regenerative energy nano-shield, that virtually protected his entire body for any ground attack. He was never observed carrying any kind of weapon. Rumors also say that he’s a new experimental type of Rolf (robotic life form), but nothing could be proved so far.