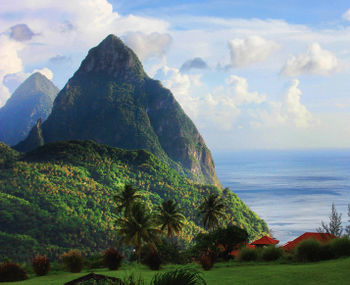 Rubica Island is the name of a multi-user holosim application, set on a tropical island. Although it provides many different opportunities for sport and leisure activities, its most popular feature is its Secrets-- temporary features which come and go at unpredictable intervals, either according to custom randomization settings or as updated by the program's developers. A large user group on FedNet is devoted to theories about whether there is an overarching theme or truth that links and explains all the mysterious secrets.

One instance of this sim is kept running on Holodeck Two of the USS Vigilant at all times unless special arrangements are in effect. It also serves to provide a home for Bob, the Vigilant's red panda mascot.

While the number of users the sim can support varies from host facility to host facility, on the USS Vigilant the maximum number of concurrent users is limited to 15. Crew are allowed two-hour timeslots; the computer will provide warnings at the last fifteen- and five-minute points. This means that crew can get 'outside' during their leisure shift every two or three days. Some trading of time slots, as a kind of informal currency, is permitted, but crew are strongly encouraged to use the time available for their own mental health and relaxation.

Rubica presents users with a wide range of climate options, including but not limited to

It's large enough to incorporate hidden valleys, deep caves for spelunking, ancient ruins which disappear a week after they're discovered, and broad fields for team sports tournaments. Some parts of the coast will thrill surf or sailing enthusiasts, other more quiet sections favour divers or sunbathers. (Noted marine athlete and extreme sports enthusiast Big Skenemmo, who markets his own series of surfing sims, gave Rubica four boards out of five.) The longest hiking loop is about three days' worth of terrain for experienced hikers, although many shorter and less difficult trails permit users to take advantage of specific views.

Users can move from one location to the next simply by telling the computer running the sim to relocate them, but long-term fans pride themselves on walking over to one of the transporter platforms which link the island's various locales, providing a simulated site-to-site transport.

The default entrance for the sim is within a natural cave at sea level, but users can also opt to enter the sim at any location, such as an altitude appropriate for skiing or hang gliding.

Time of day can be set to individual user preferences, but where user locations overlap, time of day will move toward an average.

Permanent features (although their locations and appearances can be customized to suit individual users or the sim administrators' global settings) include but are not limited to:

Some sightseeing and hiking/running/walking trails are permanent, some are temporary, giving users a variety of scenery and challenge.

The kinds of temporary settings that might be found at any given time on Rubica include mysterious cave paintings, overgrown shrines, ruined temples, waterfalls, rare flora and fauna not known in Federation databases.

Some symbols recur in the temporary content, in all kinds of different motifs and contexts. Fans of the sim indulge in speculation about their meaning. One theory is that the symbols are part of a puzzle, which, when solved, will lead the user to a cache somewhere in Federation space.

Among the symbols and motifs noted for their recurrence are:

As of the Vigilant's mission to Til'Ahn during the bluegill invasion of 2390, until further notice, Lt. Dueld taJoot has deactivated all crustacean elements of the island's simulated ecology. Animals which normally consume crustaceans, or are consumed by them, simply will not be observed feeding or being fed on. 'Bob' Eerie's red panda is a resident of the holoprogram and can normally be found in the cooler regions of the program.