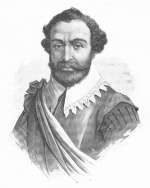 Born in Tavistock, England, in 1540, Drake was the eldest of twelve sons.

Commissioned in 1572 by Queen Elizabeth as a privateer -- essentially a licensed pirate -- to perform raids on the Spanish Main. During his years as a privateer he completed the first Circumnavigation of the earth in 1577 - 1580.

In 1481 Queen Elizabeth I awarded Francis Drake with is knighthood aboard the Golden Hind in Deptford. In 1581 he became Mayor of Plymouth and was a Member of Parliament for a unknown constituency.

Sir Francis also played a key part in the defeat of the Spanish Armarda as vice admiral in command of the English fleet, although it is arguable that he also helped cause the invasion with his Raid of the Spanish fort of San Augustín.

Drake's seafaring career continued into his mid-fifties, with it ending with his Death in the battle of Battle of San Juan. During the battle a cannonball was shot through the cabin of his flagship: Drake survived the attack but later died of dysentery.

Drake requested to be buried at sea in his full armour.

At the height of his notoriety in Spain King Philip II was said to have offered a reward of 20,000 ducats, about £4 million (US$6.5M) by modern standards, for his life.

Drake's Drum is a drum that Sir Francis Drake took with him during his circumnavigation of the world. Shortly before his death, he ordered it to be taken to Buckland Abbey and vowed that if England was every in danger someone was to beat the drum and he would return to defend his country. Additionally, it is said to be heard during times of war or when national events take place.

Between 1653 and 1957, no fewer than nineteen British vessels bore the name HMS Drake.

Among the more notable ships to bear the name in Her Majesty's Royal Navy were:

A full list can be found at HMS Drake