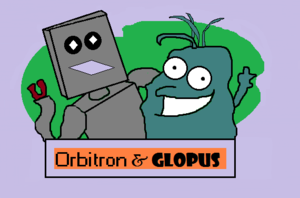 Orbitron and Glopus was an animated children's show produced in the 2360s and 2370s. The short cartoons used music and high adventure to highlight the benefits of friendship and teamwork.

The show was created by an actual robot after he returned from being lost in deep space. Orbitron and Glopus is remembered as the galaxy's first roman a clef cartoon written entirely by an artificial intelligence.

"Friends forever, and no one's gonna stop us!
Friends together - Orbitron and Glopus!
Yea-aaa-ahhhh!"

Many Federation citizens who were children in the late 2360s and through the 2370s remember the show fondly. Some, like Ren Rennyn, continue to sing the catchy songs years later. In 2391, Rennyn, a Trill, and Valis, a Bolian, bonded over their love of the show aboard USS Atlantis, proving the program's wide reach to diverse planets across the Federation.