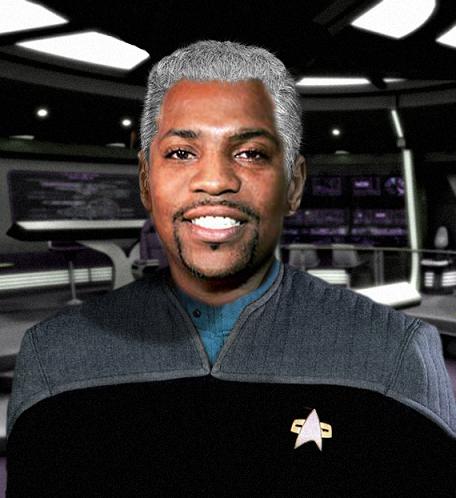 Moses excels at track and was graded 2nd in the Academy in his third year at cross country. He came top of every piloting class he attended, though has yet to put that skill to use post-Academy.
Is considered somewhat of an expert in Borg cybernetics and nano technology.

On the Independence's mission to recapture the stolen USS Phoenix in 2386, Welling was part of the boarding detail that stormed the Phoenix. During this mission he was stabbed through the back all the way through and out of his chest by an Ixvapian during an ambush in engineering. He would have died minutes later if not for the intervention of Lt Commander Rogers injecting him with a hypospray, which prolonged his life long enough to get him to sick bay back on the Independence where he could be kept alive with machine assistance until he healed. Part of the healing process involved several implants to replace the damaged parts of his lacerated organs.

Mannerisms: Has a very soothing demeanor and talks in a low almost whispering voice, however he is very confident and owns quite an authoritative presence. He enjoys being alone though is not antisocial. For example he prefers to eat at a table of his own in the mess hall.
Quarters: Fairly standard since he currently shares with another Ensign due to his rank privileges.
Habits:
Hobbies and Pastimes: Enjoys reading and spends much of his off duty time doing so. It can be anything from fiction to educational, and much of the time he is advancing his science knowledge. Spends a healthy amount of time in the gym and is a keen boxer, though his boxing skill is average at best. He also has a strong interest in cybernetic technology.
Likes:
Dislikes: Organised religion, due to his childhood (see below).
Ambitions and Goals: Career advancement is second only to his wife in his list of priorities. Wants to advance to Commanding Officer or Executive Officer of a Federation science vessel. He had the opportunity of inspecting a Nova Class science ship and was highly impressed with the research capabilities, which got his heart set on one day being a high ranking officer, preferably Captain, aboard one.
Achievements in Life: Was ranked 2nd in the whole Academy in his third year as a Cadet at cross country. His piloting skills are equally impressive.
Disappointments in Life:
Temperament: Calm but can be very firm. He is generally quite blunt and gets straight to the point, but always with good manners and understanding to the current situation.
Mental problems (complexes and phobias):
Physical Limitations:
Heroes:

Moses was born into a Christian family and felt he had the beliefs forced upon him, which pushed him away from them. He sees no rationale in believing in something that he feels there is zero proof of, and this was one of the reasons which led him life path towards the sciences. Whenever a religious conversation is started he closes himself off from it or exits where possible.