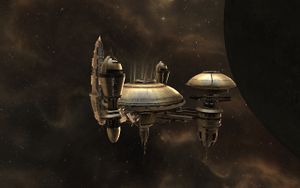 The Miranda VII Spaceport is an independent base in the Trinity Sector. It is the closest independent starbase to StarBase 118 Ops, and it is firmly set in the unclaimed area of the Trinity Sector, hidden on the outskirts of the Jenatris Cloud. It was widely considered to be a hive of scum and villany.

Miranda VII is owned by a Drellian named Vintam Dalreth. He's a minor mob boss notable in that he's connected to the Saan family on Orion.