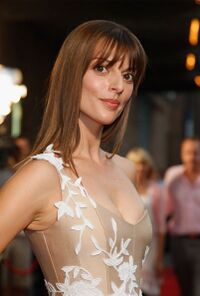 Maria Chicchoni is a 41-year-old human. Trained as a veterinarian, she operates the Abossaon Th'shriqak Memorial Animal Sanctuary on Donova IV in the Shoals.

Maria was born on Donova IV in 2357 to parents who had originally settled there from Earth for a “quieter life” to start a farm. When she was 22, Maria studied to become a veterinarian, and set up her own successful vet practice on her 30th birthday. Her practice became so successful that she eventually held semi-celebrity status and became known as “the animal whisperer” on Donova IV.

In 2389 at a veterinarian conference she met the conference organiser, an Andorian named Abossaon Th'shriqak and they subsequently began a romantic relationship. They were married in 2394. Their marriage was going well until Abossaon set up a “Battle of the Bands” event for one of his clients, “Gorgeous George”, who was notorious for illegally keeping rare animals (which is not policed on Donova IV) and using them in his shows, which disgusted Maria. Abossaon kept organising the annual event for George and they became good friends. Maria and Abossaon’s relationship became strained as a result, and Maria moved back with her parents in the middle of 2396. In late 2396 while organising the annual Battle of the Bands event, Abossaon was declared missing. Many people on Donova IV suspect Maria was the culprit, although multiple investigations by authorities have shown no evidence of this.

Maria is well spoken, and is known for being polite. The disappearance of her husband has become a scandal and has tarnished her reputation in the eyes of many on the planet.