Ensign Kvash is currently assigned to the USS Constitution-B as an anthropologist. 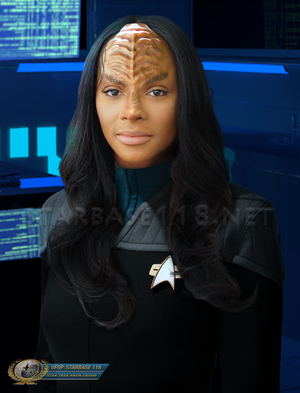 Kvash was born to Kvol and Mara on the Klingon colony world of Tev. Her older brother, Kvin, was a much more typical Klingon. He joined the military.

Kvash was more interested in understanding how people ticked, and how societies operated. Thankfully, this was a more acceptable life path for a girl than for a boy, but it still made her stand out amongst her more physically-oriented peers.

She underwent undergraduate studies at the University of Bar'or Lhess, on Qo'noS, but found herself held back by Klingon funding priorities. Her uncle, Mogush, suggested an alternative. With the Klingons and the Federation on excellent terms and an interest in xenoanthropology, why didn't she leave the Empire to complete her studies. He was a member of the diplomatic corps and no doubt saw his niece following in his footsteps.

Kvash learned Standard and applied to a number of universities across the Federation, and her eventual choice was University College London on Earth. There, she stood out; she was not only the only Klingon in the anthropology graduate program, but the only one at the entire university. Despite this, she made friends, had a couple of romantic entanglements (and drank many people under the table in London's pubs). Her Standard gained a distinct British accent.

It was her friend Mary Warwick who talked her into applying for StarFleet instead of going back home and leveraging her uncle's connections to become a diplomat. On a Federation ship she could do pure science and write papers without being mocked for it. She applied to the academy's accelerated program, having already obtained two degrees, and graduated in short order.

She was promptly assigned to the USS Constitution.