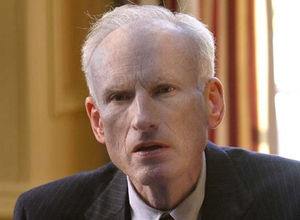 Kevin Steiner is a member of the Federation Council, representing Terra Nova. A frequent critic of President Nan Bacco, Steiner announced his candidacy for the Federation Presidency in 2392.

His platform is one of increased security through an expansion of Starfleet (he was largely responsible for an expansion of the Utopia Planitia Fleet Yards) and a focus on domestic stability.

He and his wife Adelise have made a home in Logan City on Terra Nova.