This article concerns the Kazleti who chose to become a member species of the Federation, often known as the Federal Kazleti. Information on the Klingon-aligned Kazleti may be found on the Kazleti (Imperial) article.

After a catastrophic natural disaster four hundred years ago that forced the evacuation of their homeworld, the Kazleti had since become a divided race, with one faction joining the Federation, and the other the Klingon Empire.

Originating from the world of Kazletzin, directly in the middle of what would become Klingon Neutral Zone, the Kazleti were forced to evacuate their original homeworld 350 years ago when a natural disaster slowly rendered the planet uninhabitable. This event has since become known as "The Sundering" in Kazleti history.

The hastily-constructed evacuation armanda was slow, requiring the Kazleti to choose between trying to find safe haven with the nearby, nascent Klingon Empire, or commit to a long and uncertain journey through the stars.

Many chose to swear fealty to Klingon Empire, and the Kazleti became one of their most prominent subject species. Granted a harsh, barely habitable world to colonise by their new rulers, they survived and thrived on both the planet and in the Empire by emphasising their existing warrior culture. These Kazleti are known as bold warrior-poets, renowned for their skills in language and battle.

A second group struck out in the opposite direction, wishing to determine their own destiny instead of choosing who would dictate it to them. During the long journey, these Kazleti were forced to cooperate and overcome the old clan antagonisms, developing into a unified, cohesive culture. 200 years after setting out, they located and settled their new homeworld.

Between the original evacuation and the signing of the Khitomer Accords, the two groups of Kazleti were essentially isolated from one another. Though there are some parallels between the two, time and distance have conspired to create two distinct and very separate societies.

As members of the Federation, the Kazleti possess a united planetary government, in the form of a unitary semi-presidential system. Central government is supreme in power, and the head of state is a president, who exists alongside a prime minister and cabinet. Individual states originate from the surviving vessels of the evacuation fleet, though much intermingling has taken place over the subsequent years.

The Federation Kazleti are mostly secular, having abandoned much of their religious practices during their two-century migration and in the years afterward.

The Kazleti as a species are renowned for their incredibly complex languages, though many of the regional languages have been lost to the Federation faction, with only Karutin -- known for its liquid, musical sound, and for being near indecipherable -- spoken among the population.

Federal Kazleti rarely speak their own languages away from their own world, and usage even there is in decline, as Federation Standard is takes precedent. This has prompted growing concern that Karutin is in danger of dying out, and is now a mandatory part of every child's primary education.

Karutin is a prime example of how Kazleti languages typically have two to three styles of speech that vary based on social context. All of these styles have their own grammatical rules, vocabulary and pronunciation. In Karutin, there are 3 'tones' that correspond with increasing formality.

There are also certain nuances to the vocabulary used in each tone, for instance one never uses the most formal words to refer to oneself, and certain words, even expressions, are reserved for certain tones. 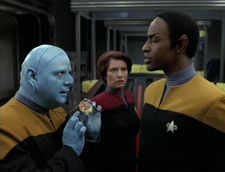 The Federal Kazleti have made an artform out of the use of recycled and scrap materials, a legacy of their long journey through the stars, and it is a point of pride among their artisans to transform the most stubborn and unyielding materials into something beautiful. As a result, even the most seemingly simple of works could have taken months to create, and the story of the piece's creation is considered as vital to the appreciation of the work as the piece itself.

Their time spent in their armada has given them an unparalleled insight into starship design, and they have become renowned as master shipwrights. The Jorarkos Institute of Technology is considered one of the most prestigious aerospace engineering schools in the Federation, and ships of Kazleti construction are famed for their elegance and beauty.

During the Federal Kazleti's great migration, it became common practice to identify individuals through the vessel they called home, rather than through their clan or family. This tradition continued once they settled on Taithros, and their names take the form <Personal Name> of <Vessel of Origin>. For example, Tulja of Chakros has the personal name "Tulja", and can trace her ancestry back to a vessel in the evacuation fleet named "Chakros". The vessel names are matrilineal, passed down through the mother's side.