The Junior Officer Protection Association (JOPA) is an unofficial sub-organization within Starfleet. It consists of those officers in the ranks of Ensign, Lieutenant Junior Grade, Second Lieutenant, and First Lieutenant who voluntarily join the organization. 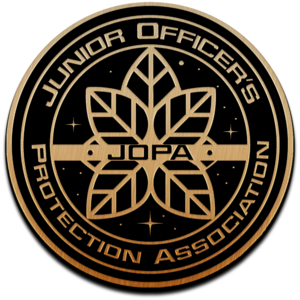 Scope, procedures, and frequency of meeting all vary widely from chapter to chapter, however the purpose of the organization remains consistent from post to post:

This protection is often seen as the more experienced protecting the less experienced from themselves. Helping to make sure others don't make a fool of themselves, or do something to get in trouble. In other cases it means helping other members with extra work in order to prevent them from getting in trouble, or achieving extra merits. Ultimately the protection varies from situation to situation, however the end goal is to support each other.

The first JOPA chapter was founded by Wes Greaves aboard the Embassy of Duronis II on stardate 299703.29. The founding members of the initial chapter consisted of Alieth, Dar Elandra, Tara Wilkins, and Sirok.

When the Embassy's mission was finally concluded, the JOPA transitioned to the USS Thor along with the rest of the transferring crew. The only person who has failed the JOPA initiation test is Ikaia Wong who was promoted before he could land a successful prank.