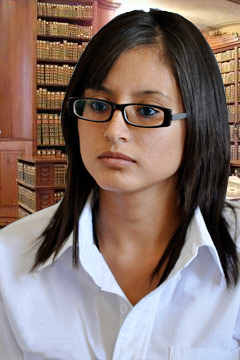 Jessica was discovered on the planet Desperot during an away mission under the command of Lt. Cmdr. Karynn Ehlanii. She was a projection of an as-yet unknown entity at the core of Desperot.

As the Desperot Entity grew better at communicating with carbon-based corporeal life forms it created Jessica in a last-ditch attempt to communicate with the away team. Jessica was a more or less perfect compendium of personalities from various humans that had lived on Desperot over the years. Thus her memories of a life as a shelf stocker in Jezebelle's Brothel were so convincing that Jessica herself is unaware of her true nature and will likely remain so the rest of her life.

The following material comes from recorded conversations between Jessica and an anonymous student on a Federation colony. The student has gracefully allowed us access to his/her recordings of Jessica's description of her experiences on Desperot and of her subsequent schooling, on condition that he/she is allowed to remain anonymous.

A Member of her Community

Jessica was initially a devoted follower of Administrator, the leader of the hedonic cult that sprung up on Desperot in response to failed attempts by the Desperot Entity to communicate with the carbon-based life forms on the surface.

However, on contact with the away team her faith wavered and she realized that the isolationist teachings of Administrator were false.

Shortly after the departure of the away team from Desperot, Jessica was unwittingly dumped into a vertical maintenance craft tunnel at the top of a mine. She had been standing on the hatch that opened into this tunnel attempting to confront Lt. Cmdr. Ehlanii regarding her refusal to accept Administrator's teachings regarding the miner Rowls.

During her encounter with the away team Jessica hallucinated several birds speaking with her and indicating that they considered her worthwhile. On several instances they mentioned that they had found someone with whom they could communicate. No psychologist has officially probed Jessica regarding these experiences.

Probably as a result of the Desperot Entity's need to explore the world, Jessica found in herself an insatiable desire to write about her experiences. As a result she decided to attend Orson College in order to get a degree in creative writing. At present she is a student there. She reports that she continues to have strange dreams about contemporary figures and events in Starfleet.

Jessica's writing is actually a viewing into the reality of the SB118 world. Of course from Jessica's perspective she is really just writing fiction.