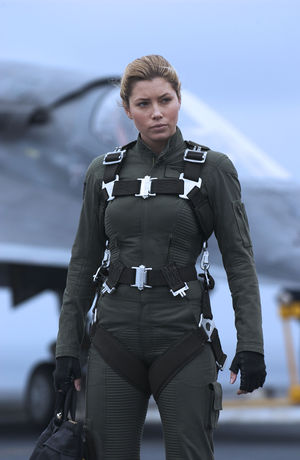 DISLIKES: Being tied down

WEAKNESSES: Can be very goal orientated and other things can suffer. Likes to show off.

QUIRKS: likes to work on her own craft and is present for as much as she possibly can.

AMBITIONS: To make a name for her through her piloting skills.

Jane gained her love of flying from her father; from an early age it was obvious that she was a natural pilot. As soon as she was allowed, Jane took shuttle training; instead of rushing through it, she took the time and learnt all about them and how they worked. Her knowledge of the mechanics only improved her technical flying.

At 14 Jane took part in her first flying display with her father. She loved the attention that she grained, being the youngest competitor there. Her precise flying and cool head made her a natural at display flying. Despite several offers from manufactures and designers, she decided that go into star-fleet so she could expand her flying.

Jane wanted her last Display before going into star-fleet to be something special, so they finished off with the Kolvoord Starburst.

She joined star-fleet at 19. As Jane was already a grade top pilot. Her seaming natural ability with flying and knowledge of flight alienated her with her pears. Jane was accepted into Nova Squadron in her second year and led the squadron for her last year in the academy. They won the Rigel Cup under Jane.

Her first duty found Jane straight into combat and she found herself quickly going up the kill board. She was the fasted person in the flight group to make ace status and was give ace as her call sign.

She was selected to for the ACPA (Advanced Combat Pilot Academy) and graduated top of her class. On one training mission Jane took, her craft into a canyon flew the whole length of it despite her wingman pulling up less than hath way through. She was disciplined for dangerous flying and the canyon was made out of bounds but she maintains that it was well with her skill level. To prove her point she flew the canyon in the simulator at faster speed without incident.

She was offered a position as an instructor rather than going back to her squadron and Jane took it. She could not resist the opportunity to fly agents the best pilots in the federation.

Jane got the reputation of one of the hardest instructors in the course and pilots dreaded going up agents her. With her quickly rising notability her husband found it hard to compete and they started too drifted apart. She was temporally transphered to the Mars Academy to help improve Advanced Flight Instruction where is meat Debra Cross and despite being married they had a relationship. It ended with Jane’s husband walking in on them. Due to Debra’s father influence the records of the incident where sealed.

Not only did they strip Jane of rank but also revoked her flight privileges. Due to her engineering skills she was assigned as a flight technician and worked with several junior pilots. She impressed her superiors by helping the younger pilots and was giving back her flight privileges and quickly got back into fighters.