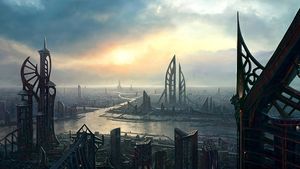 Inox is a non-aligned planet in the Inox system located between Federation and Tholian space.

In the early 2390s, citizens were unsatisfied with high unemployment and poor services provided by the government. With the Federation Transport Union strike consuming much of 2392, most of Inox's trade network with the Federation had effectively been shut down, leaving thousands more out of work.

After weeks of demonstrations and unrest following the acquittal of a high-ranking government official accused of corruption, protesters began a violent—and effective—campaign for revolution against the Inoxan government in 2392. The Inoxan government fell to rebel forces just weeks before the end of the Federation Transport Union strike.