Currently Assigned to the USS Thunder-A and Embassy, Duronis II. 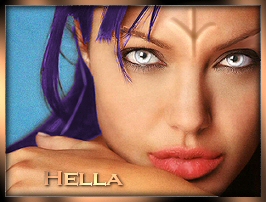 Although taller and slightly heavier than normal human females, Boslic women are considered quite attractive humanoids, and often described as alluring and seductive. Hella is typical of these traits. She has a smooth vertical arrow-shaped furrow on her forehead and significantly protruding bones along her brow line, accentuating her sparkling eyes. She has flawless skin and long, silky, flowing, hair with purplish tones.

History Born on Bosala II, Hella's parents are Boslic free-traders sanctioned by the Boslic culture, which is much like that of the Ferengi, but more ethical, elegant and charismatic.

Akin to the Ferengi, Boslics were often referred to as the Beautiful Ferengi. The differences were many, but the contrast in physical appearance was the biggest. Boslic women were of a slender build, and almost as tall as a Klingon. Their four-lobe brain didn't require the distorted look of the Ferengi. The only distortion was a slight protrusion over their brow. And with their fair peachy skin tone set off with lavender to purple hair tones, they were considered striking, appealing to males of all species. So much so, they lavished gifts freely, merely to be in their presence, much like the legendary Geisha on Earth.::

As spacefarers, her parents made their primary port on DS9, Hella met many Starfleet Marine officers. Listening to their stories about missions they had been on, she became interested in pursuing a career as a Marine.

At age 18 her parents' travels took them to Mars, and it was there Hella seized the opportunity to convenience them to let her join Marine Officer Candidate School on Mars. After training in Special Operations, she served two years, and then mustered out with honors with the rank of 2nd Lieutenant.

Longing for an easier way of life, she was spirited into pirating, and soon became the leader of the pirates. She was capture on Dessia II at the Pirates Stronghold, but because she used the skills she had learned as a Marine to help capture a Tal Shiar encampment and free their hostages, she was allowed to return to the Marines aboard the USS Challenger to serve rather than to be incarserated.

Her thoughts about returning to the Marines...

::She kept thinking to herself that she had been a fool to stay with the Marines in the cave, when she could have easily gotten away through the secret passage. But her life for the past few years had been a series of wrong choices in her lust for riches. This time, however, she had made the wrong choice simply because she was enjoying the camaraderie of the Marines, much like those she had walked away from on a whim when it came time to muster out. Of course, her lust for Dante and Madelyn (two of her men friends) had been the deciding factor in that decision, but she knew in her heart that she only had herself to blame for her larceny.::

Her Proposal to Colonel deMarc...

Hella: I was thinking that it would be a waste of good manpower to sit in a holding chamber, when I could put my experience at your disposal.