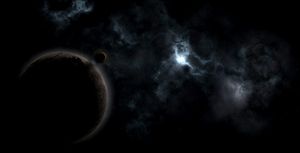 Hecate is a rogue planet that appeared in Cardassian space in 2397. The USS Veritas under the temporary command of Lt. Commander Jansen Orrey was ordered to investigate the planet as it passed through Federation territory.

The planet showed the strange ability to go into a subspace layer that allowed the planet to travel great distances in a short time. While not on the subspace layer, the planet travelled as a normal celestial body, however, it seems to be attracted to certain magnetic fields produced by warp drives.

On the surface, the crew of the Veritas discovered some sort of ruins that seemed to be related to the Menthar civilization with at least one dome that preserved some sort of atmosphere around the ruins, however humanoid lifeforms couldn't withstand the conditions and should wear EVA suits to be on that surface.

It was also discovered that there was some sort of lifeform that has been technologically altered. The extent of those alterations are still being investigated.

The natural barometric pressure of the planet is high. Starfleet EVA suits are not capable of withstanding the atmospheric pressure.

Along the equator of the planet are located several lakes composed of liquid diamond.

Next to one of the lakes, several artificially generated "domes" exist. They are artifically generated atmospheric "bubbles" that use an energy shield to maintain an atmospheric pressure of approximately 1,000 hectopascals. They appear to have been constructed to support life forms, however the thick foggy atmosphere inside the domes are still hazardous, requiring people to wear EVA suits. The surface inside the domes consist of a graphite like dark grey sand, that has shiny flecks in it. The outside atmosphere appears like thick dense smoke.

Located within one of the domes is an upside down dark grey “L” shaped two storey building, approximately 20 meters in height. The second story is longer than the first storey and has partially fallen away - a pile of the building’s material is located underneath the second level. There are hieroglyphics on the walls.

On the second level of the building, a room contains a throne-like chair with an static non-humanoid figure sitting in it, covered in an unknown crystal-alloy that bears inscriptions. Touching the figure reveals a pale-indigo "holographic" version of the static figure, that speaks the following:

Universal translators are unable to decode the message.

The room was formerly guarded by three humanoid-looking machines made from some form of crystal-alloy. Their "hands" have talons. Phasers have no effect on them, other than making them partially glow. They contain a teal-blue liquid. They were disabled by an away team from the USS Veritas.

The planet sustains an unknown biological life form, seemingly silicon based, that contain approximately 13 percent artificial components largely composed of diamond. It has an unknown cloaking capability. Its eyes seems to change colour for unknown reasons. When uncloaked, the creature is a completely matte black life-form with six thick “legs”, with the ability to stand upright on its hind two. Its body is almost perfectly cylindrical, its shoulders at 45 degrees to its body, leading up to its head, which slightly resembles a puma without ears. Its three eyes seem to hover in front of its face, rather than be embedded in its "skull". A few seconds after de-cloaking, vein like lines appear all over its body, glowing a silvery-blue.

It speaks in a language thought to be Menthar. During the away mission by crew from the USS Veritas, Raissa Moonsong was able to decipher a few words based on previous experience from telepathically communicating with Sentinel, an ancient Menthar AI. After updates by Raissa, the universal translator was able to decipher parts of the creature's language. Before the away team was evacuated, it gave a message providing a clue of it's origin and purpose:

Shumalyos. The protectors. We are linked to the awareness. The awareness search, to complete ri’Tua, to bathe in the Starlight of a new world.

It also uses the word "itani" as a form of warning.