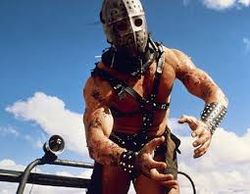 Gronk is a huge hulking mass of muscle, not the smartest in the room, but definitely the strongest. He stands almost 6'6" and weighed at least 340 lbs. His face is scarred, his nose broken and he wears only tight fitting pants and combat boots, the better to show off his body, that and his scars. He is a little slow, all the blows he has taken to the head would do that, but when he puts his mind to something nothing stops him.

Gronk was hired on as a personal bodyguard to a wealthy merchant. He served his employer well until the day came when his employer decided to double cross a business rival. He ordered Gronk to deliver a package to his rival and wait for him to verify it's contents. The package was a bomb. It did kill it's target but failed to kill Gronk. He did however return and kill his employer. Since then he has been stranded in the city of Mith on Cart'hen III.

Gronk recruits mostly individuals who are large and strong. The standard look that most of his people use is to go bare chested except for belts and equipment harnesses. Most also were combat boots and either tight or loose pants.

His personal HQ is within a large concrete warehouse that has a huge weight lifting area in the center. The outer walls are reinforced and the central area is the living space with bunk beds around the outside. The whole place is one large open area.