The Eth race are a species of humanoids whose homeworld is located within the Theta Tucanae system, and were encountered by the crew of the USS Garuda in 2391.

The Eth's homeworld of Pleethion is part of the Theta Tucanae system, within the bounds of the Menthar Corridor.

Pleethion is a planet roughly the size of Earth, but the average temperature is about ten degrees higher all year round, with extremes of heat even more common. The planet is also very active tectonically, with large mud volcanic domes and fields covering much of the surface. This proves to be a double-edged sword, as the geo-thermal heat is a source of energy for the Eths, and the mud (once cooled) proves to be very fertile. However, the mud dome are massive - thousands of feet high sometimes - and if they begin to erupt and flow too near to a settlement, the consequences can be lethal.

Bocasa is Pleethion's oldest city, the heart of the Eth's art, culture, and heritage. The largest settlement on the planet, its population is numbered in the millions.

The Eth are an egalitarian society, and decisions are taken collectively. This makes the society very equable, but rapid decisions in times of crisis can be slow and ponderous. 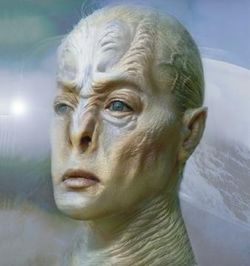 The Eth bear resemblance to the accepted humanoids of the galaxy.